We need a king to protect us from the evils humanity, as well as the darkness of jungle. That much should be obvious by now. 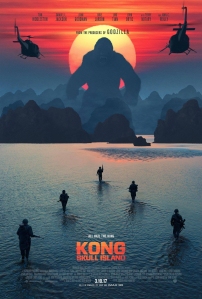 Jordan Vogt-Roberts is an American director and screenwriter. His directorial debut came with The Kings of Summer, a coming of age comedy that was released in 2013. So a bit of an odd twist that he followed it up with this action gem, and that he will also direct the future Metal Gear Solid movie. But who knows what evil lurks in the hearts of men? That’s right, only The Shadow knows, also there is a surprising amount of comedy to be had here… and so I move on.

Kong: Skull Island is the second monster film in the new MonsterVerse franchise that Legendary Pictures started down the path with in 2014’s Godzilla. There are two more monster movies lined up in the next few years, another Godzilla movie which will introduce Mothra, Rodan, and King Ghidorah, and the much anticipated Godzilla vs Kong, expected to debut in 2020.

But enough about that, let’s get into the jungle and discuss the surprisingly entertaining Kong: Skull Island. One that both audiences and critics agreed upon!

After a dog fight, in the midst of World War II, two fighter pilots parachute to an island, and then engage in close combat, but the fight is interrupted by a behemoth ape known as Kong.

Fast forward to 1973, government agent Bill Randa (John Goodman) hires former British SAS Captain James Conrad (Tom Hiddleston), a skilled tracker, to guide an expedition to map out an island known as Skull Island. Escorted by a Vietnam War helicopter squadron led by Lieutenant Colonel Preston Packard (Samuel L. Jackson, the group is joined by photojournalist Mason Weaver (Brie Larson). Packard’s men begin the operation by dropping explosives developed by seismologist Houston Brooks (Corey Hawkins) to map out the island. However, the air unit is attacked by Kong, who kills a number of military personnel and scatters the survivors  into two groups across the island.

After being confronted by Packard, Randa reveals his affiliation to the secret government organization Monarch, which was trying to prove the existence of monsters and determine their threat to humanity. The other survivors, including Conrad and Weaver, try to get to a rendezvous point to meet a resupply team arriving in three days’ time. They encounter the local Iwi natives and an older Marlow (John C. Reilly). He reveals that Kong is the island’s guardian, worshiped as a god by the natives for protecting the island’s inhabitants from many predators, including reptilian underground monsters dubbed “Skullcrawlers”. They have killed Kong’s ancestors, leaving him as the last of his kind.

Packard’s group begins making their way to Chapman, one of the survivors, whose helicopter crash-landed elsewhere. Meanwhile, Chapman is ambushed and eaten by a Skullcrawler. Conrad’s group helps Marlow complete a boat built from parts scavenged from the original downed planes. They regroup with Packard, who insists on searching for Chapman, though his true objective is to find and kill Kong.

Marlow leads the two groups to a mass grave littered with the bones of Kong’s kind. A Skullcrawler attacks the group, spitting up Chapmans dogtags and killing Randa and many soldiers. Learning about Chapman’s death, a vengeful Packard blames Kong for the deaths of his men and becomes determined to kill him. The two groups part ways, with Conrad and Weaver finally encountering Kong up-close, and resolve to save him.

Packard’s group triggers napalm explosions to lure him in. And it works. Conrad’s group arrives and persuades the other soldiers to spare Kong, but Packard refuses to stand down. Then, a massive Skullcrawler emerges from the lake, and Packard is crushed to death by a recovering Kong. The Skullcrawler overpowers Kong at first and chases the humans, but Kong rips it up. Kong also saves Weaver from drowning, as she had been knocked into the water during the fight, and allows the survivors to leave the island.

During the credits, Marlow returns home, reuniting with his wife, meeting his son for the first time, and watching a Chicago Cubs game on television. Post-credits reveal ancient drawings of Godzilla, Mothra, Rodan, and King Ghidorah, and even a fight between Godzilla and Ghidorah.

With just the right mix of action, over-the-top deaths, and seemingly unintentional comedy, Kong: Skull Island is an homage to the B grade monster movies of the past. You want to see Kong jump-punch a helicopter, and he does it. It’s even rewarding to watch all of the different creatures destroying the soldiers as they traverse the island.

What starts out as a slow ride with very little in the way of plot, speeds up in the second act, and we finally get a great story along with some silly characterizations that serve as filler for the the king.

Pros: Kong looks amazing and is incredible as a Lovecraftian type deity. John C. Reilly helps ground the story with his man-out-of-time bit. The CGI is well done too.

Cons: Almost all of the actors are mismanaged here, with Brie Larson coming off confused, Samuel L. Jackson feeling stiff, and Tom Hiddleston having nothing to do.

Points of Interest: Vogt-Roberts was inspired by video games to include many POV shots of guns being fired, even taking inspiration from Resident Evil to show a helicopter hitting the ground. Marlow and Conrad are references to Joseph Conrads book, Heart of Darkness. As well as Apocalypse Now being a thematic and visual inspiration.

I think it needs to be emphasized that this is not a kind and compassionate Kong, he is fighter, tough as nails and only accepting of humans upon them proving themselves to him. The allusions to Heart of Darkness are welcome, and the shift away from the the three other adaptations is satisfying too. This is excellent popcorn fare.

Despite the way too large ensemble cast, and the silliness that is needed to get us to Skull Island in the first place, this movie works well in so many ways. And thankfully John C. Reilly is able to serve a good role as something of a protagonist, despite such a small character arc. I think after the disappointing Godzilla remake, Legendary are finally on the right track.

But that’s not all the theories for today, I’ve got another Watch Culture episode to share too.

Direct quote from André “It’s cool in this era too, man,” which let’s you know that Luc Besson did good with this movie from the 1990s. But you should just watch the episode, because this episode is full of gold.

Perspective is everything when it comes to communication. One person’s experience is unique compared to another, but factor in variables like age, gender, ethnicity, and education, and things become that much more nuanced.

Today’s film review features a story that addresses exactly that idea. Shall we?

Leonad “Lenny” Abrahamson is an Irish film and television director. He has 5 feature films under his belt and now one Academy Award nomination for Best Director. And I’ll be the first to admit I knew absolutely nothing about him before looking into this review of Room. Which I only decided to watch after sitting down for the 88th Annual Academy Awards.

But I’m sure glad I did, because this movie packs an incredible emotional punch and hits you right in the ethics too. But let’s take a quick peek at the plot (I’ll refrain from spoiling the end).

Taken from Wikipedia and edited,

In Akron, Ohio, 24-year-old Joy (Brie Larson) and her five-year-old son Jack (Jacob Tremblay) live in a shed they call Room. They share a bed, toilet, bathtub, television, and kitchen; the only window is a skylight. They are captives of Old Nick (Sean Bridgers), Jack’s biological father, who abducted Joy seven years prior, and routinely rapes her while Jack sleeps in the wardrobe. Joy deals with depression and malnutrition. She allows Jack to believe that only Room is “real,” that the world on television is dreams.

Old Nick tells Joy he’s lost his job and cannot  afford supplies. When Joy reacts badly, he cuts their heat and power. Joy tells Jack about the outside world; which he rejects initially. She has Jack fake a fever, hoping that Old Nick will take him to a hospital where he can escape, but Old Nick decides to return the next day with antibiotics.

Joy wraps Jack in the carpet and has him play dead so Old Nick will remove him from Room. Falling for the ruse, Old Nick places Jack in the back of his pickup and drives through the neighborhood. Awed at first, Jack then jumps from the truck and attracts the attention of a passer-by. Police arrive and rescue Jack. Based on his recollections of Room and what Joy told him, the police find Joy and rescue her. Old Nick is arrested, and Joy and Jack are taken to a hospital.

Reunited with family, Joy learns her parents (Joan Allen, William H. Macy) have divorced and her mother has a new partner, Leo (Tom McCamus). They stay at her childhood home where her mother and Leo reside. Her father cannot accept Jack and leaves. Jack struggles to adjust to life in the larger world, speaking only to his mother and expressing a desire to return to Room. Joy struggles with anger and depression, lashing out at her mother and ignoring doctor’s appointments. She agrees to a television interview, but becomes angry when the interviewer questions her decision to keep Jack with her in the room after his birth, rather than asking Old Nick to leave Jack some place that he could be found.

It is an intimate and emotional story that continues an incredible arc.

Pros: Though an incredibly dark topic, the narrative never feels without hope or promise. Brie Larson does a fantastic turn as the mother and breakout young actor Jacob Tremblay is amazing as well.

Cons: The second half is quite difficult to digest and as a result it feels like it could have been given more of same treatment, looking through Jack’s eyes as the first half.

Points of Interest: Brie Larson spent a month in isolation without phone or internet and maintained a strict diet to prepare for the role, it caused her to become depressed in the last week. Old Nick is another name for the Devil in Christianity.

This is an incredibly powerful film depicting a very intimate and traumatic mother-and-child story. It is handled in such a way that you get to experience it from two perspectives simultaneously, with many of the objects, people and events often being fun or scary for Jack whereas they are painful and torturous for Joy.

I highly recommend you go see this film, because whether you’ve read the book or not, the story is unique and the characters are well acted.

And that’s all I’ve got for today, dear readers! Come back tomorrow for some wisdom, and please leave some comments as well as subscribing to the blog if you want to see more!