Like tears falling in the rain, so too do many movies leave a minor impact upon our hearts. Thankfully this movie doesn’t ruin a legend, but makes it more compelling. 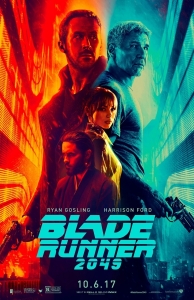 In case you’re unfamiliar, Denis Villeneuve is a French Canadian film director and writer. I’ve reviewed his movies before and I generally like whatever projects he works on. Arrival was a great addition to the science fiction catalogue, and thankfully won an Academy Award, while Sicario is just beautiful to behold. Interestingly enough, I haven’t reviewed Enemy or Prisoners, yet – but I loved those movies too. Maybe there are some Watch Culture videos in the future coming for those films, because they are totally worth a watch. And even though Villeneuve doesn’t have the reigns on the Sicario sequel, I’m still excited to see it.

That’s how influential his directorial work is. Now he’s taking up the Blade Runner mantle, to excellent consequence.

Taken from Wikipedia and modified…

In 2049, K (Ryan Gosling), a replicant, works for the LAPD as a blade runner, and “retires” (kills) rogue replicants. At a protein farm, he retires rogue replicant Sapper Morton (Dave Bautista) and finds a box buried under a tree. The box contains the remains of a female replicant who died during an emergency caesarean section, demonstrating that replicants can reproduce sexually, previously thought impossible. K is asked to find and retire the replicant child by his lieutenant (Robin Wright).

At Morton’s farm, K sees the date 6-10-21 carved into the tree trunk and recognizes it from a childhood memory of a wooden toy horse. Because replicants’ memories are artificial, K’s holographic girlfriend Joi (Ana da Armas) believes this is evidence that K was born, not created. K tracks the child to an orphanage in ruined San Diego, but discovers that the records from that year are missing. K recognizes the orphanage from his memories, and finds the toy horse where he remembers having hidden it.

Dr. Ana Stelline (Carla Juri), a designer of replicant memories, confirms that his memory of the orphanage is real, and K concludes that he is Rachael’s son. At Joi’s request, K transfers Joi to a mobile emitter, an emanator. He has the toy horse analyzed, revealing traces of radiation that lead him to the ruins of Las Vegas. There he finds Deckard, who reveals that he is the father of Rachael’s child and that he scrambled the birth records to protect the child’s identity; Deckard left the child in the custody of the replicant freedom movement.

After killing Lieutenant Joshi, Luv tracks K to Deckard’s hiding place in Las Vegas. She kidnaps Deckard, destroys Joi and leaves K to die. The replicant freedom movement rescues K. Their leader Freysa (Edward James Olmos) informs him that Rachael’s child is female and he is not Rachael’s son. Freysa asks K to kill Deckard for the greater good of all replicants and to hide the freedom movement.

Luv brings Deckard to Wallace Co. headquarters to meet Niander Wallace. He offers Deckard a clone of Rachael for revealing what he knows. Deckard refuses and Luv kills the clone. As Luv is transporting Deckard to a ship to take him off-world for interrogation by torture, K intercepts and kills Luv, but is severely injured in the fight. He stages Deckard’s death to protect him from Wallace and the rogue replicants, and leads Deckard to Stelline’s office, having deduced that she is his daughter and that the memory of the toy horse is hers. K dies peacefully from his injuries while Deckard approaches Stelline.

This is a film which acknowledges a rich history of material that precedes it, and yet it manages to venture out into the void of philosophy and bring back ideas to explore. While the first film examined intimacy, gender politics, the evolution of humanity and other topics on such a scale that we felt included, this film does the opposite. Every scene is one of a barren wasteland, monotlithic buildings and open caverns force the moviegoer to examine the sheer insignificance of K. His lifespan is severely shortened, his love is with a hologram, and even his possibility at an identity is taken away from him.

And yet, he strives for a life well lived. I would argue that his relationship with Joi is far more human then any of the other characters we see on screen, and it is very sad when he loses her. And thankfully Harrison Ford’s Deckard is a beaten down shadow of what he once was too, not dominating the screen as he did in The Force Awakens, but helping to make you feel discomfort about the future of humanity.

Pros: It expands upon the story that we loved from over thirty years ago. Better yet, it manages to be impressive on it’s own. Ryan Gosling is fascinating to watch as K, while Dave Bautista, Ana da Armas, and Sylvia Hoeks all add to the allure of this fantasy world.

Cons: Jared Leto falls flat with his performance, perhaps it’s the limited screen time, or that he often appears to be rebelling against his profession. And the film is a very slow burn.

Points of Interest: David Bowie was slated for the role of Wallace, but passed away before the film started production. The role of K was also written specifically with Ryan Gosling in mind, Villeneuve had no other actors chosen to audition. In this future, wood is incredibly rare and valuable – that Wallace has a house made entirely of wood is no accident.

I was really glad to learn that Villeneuve had originally cast David Bowie as Niander Wallace, even if he passed away before filming started. Bowie was a staple of innovation, futurism and all of the things that go into making good art. If my minor concerns with the casting of Jared Leto, and the somewhat forgettable CGI Rachael (Sean Young) could be removed, this movie would have been my number one pick for 2017, but even good simulations are always just a tad unrealistic.

I hope at this point you’ve made the decision to check out this sequel, and I’ll be curious if you note the same things I did about the scale of the film, the beautiful intimacy of K and Joi’s relationship, and the poetry in a decaying Rick Deckard. Just like the original, I’ll likely have to watch this film a few times before all of the themes really sink in, and I have a theory that’ll be for my own good.

And incidentally, we have a new Watch Culture video to share with you too. It’s the original, the masterpiece, the timeless Blade Runner. This short review should give you some insights into why the 1982 classic deserves those accolades. And hopefully you enjoy it enough to like the video, leave a comment, and subscribe to both my blog and the YouTube channel!