I find it supremely satisfying to learn that a well-made movie, about a comic book character, and an origin story no-less, is at the top of this list both critically and commercially.

That the character is a black superhero appeals to me as both an artist (and an outlier) and because I think we’ve seen more then our share of white superheroes for some time now. 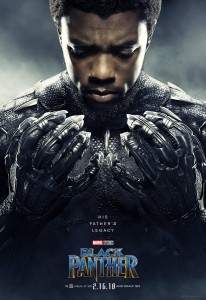 Ryan Kyle Coogler is an American film director, producer, and screenwriter. He is best known for crafting stories that put minority characters and their cultures into the spotlight. He has directed three films, Fruitvale Station, Creed, and now Black Panther, all of which feature Michael B. Jordan in a prominent role. He will also be directing the Creed sequel which releases later this year.

Black Panther is currently the highest grossing film in history directed by an African American, a critical success and an overwhelming commercial success with an insane opening weekend box office of $202 million, beaten out only by two of the three Avengers films, Jurassic World, The Force Awakens, and The Last Jedi.

After the events of Captain America: Civil War, King T’Challa (Chadwick Boseman) returns home to the reclusive, technologically advanced African nation of Wakanda to serve as his country’s new leader. However, T’Challa soon finds that he is challenged for the throne from factions within his own country. When two foes (Andy Serkis) (Michael B. Jordan) conspire to destroy Wakanda, the hero known as Black Panther must team up with C.I.A. agent Everett K. Ross (Martin Freeman) and members of the Dora Milaje (Danai Gurira), Wakandan special forces, to prevent Wakanda from being dragged into a world war.

This is a film which upends a lot of stereotypes we’ve come to expect in movies. With an almost entirely black cast, each character is developed with great detail, and so there is someone for everyone to identify with, effectively eliminating any oversimplification of motives, interests and abilities. Wakanda is so much more technologically advanced then anywhere else in the world, in fact, they make James Bond movies look silly, which is demonstrated when T’Challa visits Seoul.

And let’s not forget that Shuri is the most brilliant scientist, and that the Dora Milaje are the most bad ass of the bad ass warrior guards I’ve seen in any movie really.

Pros: It’s beautiful to look at, with meticulously created sets, character backstories, lots of supporting cast that work well together, and well directed, despite it’s long runtime. Michael B. Jordan sings as Killmonger, making him one of the best villains, it not a serious contender for number one.

Cons: The fighting and action is such a formula now that it’s difficult to really appreciate it in light of all of the political discourse taking place over the length of the film. Chadwick Boseman takes a backseat to Michael B. Jordan.

Points of Interest: The name “Wakanda” comes from the Wakamba tribe of Kenya, also known as the Kamba. Martin Freeman and Andy Serkis both starred in The Hobbit movies, and were affectionately known on set as the “Tolkien White Guys”. In one of the areas where Wakandan glyphs move on translucent walls, one wall is blue and has “4” written on it, an homage to the Fantastic Four, where the Black Panther and Ulysses Klaw made their debut appearances.

Not only is it the best looking Marvel movie yet, the soundtrack is excellent on it’s own, and it can knowingly function as it’s own film, with very little involvement from other Marvel Studio movies. Plus the politics. Thank God for the political subtleties of this story.

So there you have it, all of my thoughts and feelings about the Black Panther movie, which I believe is a very important movie in the MCU and am very thankful has gotten so much praise from minority groups, considering how well made it is. I hope that means we will see even more minority character representation in the MCU movies going forward – perhaps even a Sam Wilson Captain America?

I also thought it would be a good idea to release a Watch Culture video about Captain America Civil War to coincide with this Black Panther review! After all, we wouldn’t have gotten a Black Panther movie if this one hadn’t preceded it, plus it’s an amazing representation of comics in general.

Lastly, please let me know what you thought of both of these reviews on love, like and share the video, and subscribe to the channel (and email) if you haven’t already. Lots more theories to come!