You’ve heard that love conquers all, and that all you need is love. But in a real world, love is not the obvious emotional outpouring, hate is far more common. But I have this interesting theory.

In a time when instant gratification runs rampant, a film that interlaces three character arcs, can accomplish a larger thematic goal. 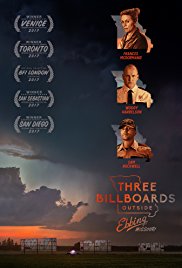 Martin McDonagh is a playwright, writer and director. He has dual citizenship in England and Ireland, having spent most of his childhood in London, and is widely regarded as an Irish playwright legend. Three Billboards Outside Ebbing, Missouri is his third turn in the directors chair, but In Bruges and Seven Psychopaths are both amazing films too.

While he has written far more plays then films, McDonagh has admitted that he has always felt connected to film, that it’s something he appreciates on a personal level. And I think that comes through with Three Billboards.

Special thanks to Fox Searchlight Pictures and their IMDB account for the summary.

After months have passed without a culprit in her daughter’s murder case, Mildred Hayes (Frances McDormand) makes a bold move, painting three signs leading into her town with a controversial message directed at William Willoughby (Woody Harrelson), the town’s revered chief of police. When his second-in-command Officer Dixon (Sam Rockwell), an immature mother’s boy with a penchant for violence, gets involved, the battle between Mildred and Ebbing’s law enforcement is only exacerbated.

This might just be the greatest performance of Frances McDormand’s career.

The plot is entirely driven by anger – McDormand’s Mildred Hayes is empowered by righteous anger to seek justice against the police for her daughter’s rape and murder, but it never really gets any easier for her. Harrelson’s Chief Willoughby commits suicide to spare his family the pain of watching him succumb to cancer, using violence to demonstrate compassion and love. Rockwell’s second-in-command Officer Dixon then enacts his grief through violence against a billboard salesmen, losing his job in the process, and spiralling towards the bottom of the barrel.

The friendship that Willoughby shows Mildred, despite the public believing they hate each other, is the first major act of love we see.

The second major act of love also comes from Willoughby, this time post-humously, in the form of a letter encouraging Dixon to use love rather then hate to become a detective.

The third comes from Red Welby, the ad man that Dixon had beat within an inch of life in his grief-fueled act of brutality. Welby forgives Dixon and offers him a glass of water when Dixon is recovering from burns; burns Dixon got after Mildred lit the police station on fire in her continuous attack on the police.

The final act of love comes from Dixon himself. He overhears a man bragging to a friend about a women he had raped, a woman who was dying from being lit on fire. He then gets into a brawl with the rapist, scratches the man to get his DNA, and hopes to reveal the man as the Hayes murderer.

When Dixon tells Mildred it wasn’t the guy, she forgives him and appreciates the very-delayed attention from the police, even if Dixon is no longer an officer. But the pair decide to seek justice against the rapist anyway, ending the film as they take a road trip.

Pros: It balances the humour ever so carefully with the drama, and each of the three leads do their part to see the story to it’s unobvious, but completely realistic ending.

Cons: On your first pass it might seem like female aggression is totally acceptable or that racism can be redeemed. Upon subsequent viewings, the layers come through.

While the narrative of the film is amazing to witness, and gets even better upon subsequent viewings, what I find even more impressive about this film is that it features elements of westerns and intelligent comedy about life in a small town. These are a people in a constant of re-evaluation.

This drama happens in a fictional town, but the real social issues presented can forgive any fantasy elements being presented. In short Three Billboards is an amazing film and well worth the attention. You should totally watch it.

And if that story didn’t whet your whistle, Mike and I made a really cool video review about the film Nightcrawler. One of my favourite Jake Gyllenhaal movies, and an interesting peek into the world of stringers and documenting violent crime.

So please let me know what you thought of our review, like and share the video, and subscribe to the channel if you haven’t already. With so many more theories coming up in April, you’d have to be a fool not to check out even more great timotheories content.