Not everyone gets a fairytale, but if you will it you can absolutely have a happy ending. And this movie will have you pondering those ideas over and over again. 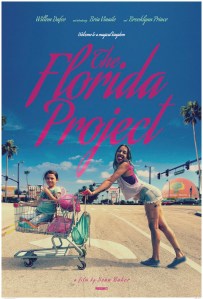 Sean Baker makes movies about topics that he wants to see on the screen. Movies about the lives of illegal immigrants with gambling debts, street hustlers, intergenerational friendships, and trans sex workers. People who are very real, but who have less then glamorous stories to tell.

An American director, cinematographer, producer, writer and editor, Baker’s best known for making independent films about the aforementioned subjects. Notably Starlet, the iPhone filmed Tangerine, and most recently The Florida Project. Fun fact, supporting actor Willem Dafoe has been nominated for an Academy Award in his portrayal of Bobby Hicks. But what’s it about?

Special thanks to IMDB user Huggo for the synopsis.

Halley (Bria Vinaite) lives with her six year old daughter Moonee (Brooklynn Prince) in a budget motel along one of the commercial strips catering to the Walt Disney World tourist clientele outside Orlando, Florida. Halley, who survives largely on welfare, has little respect for people, especially those who cross her, it an attitude that she has passed down to Moonee, who curses and gives the finger like her mother. Although the motel’s policy is not to allow long term rentals, Bobby (Willem Dafoe), the motel manager, has made arrangements for people like Halley to live there while not undermining the policy as he realizes that many such tenants have no place to go otherwise. Halley, Moonee and Moonee’s friends, who live in the motel or others like it along the strip and who she often drags into her disruptive pranks, are often the bane of Bobby’s existence, but while dealing with whatever problem arises, Bobby has a soft spot especially for the children and thus, by association, their parents, as he knows that Moonee and others like her are just children acting like a children under whatever guidance they have, Moonee who has less guidance than most. Although there are some lines which he will not tolerate to be crossed, Bobby lets most of the disruptive things that they do go, largely as long as it does not affect the bread and butter of the motel, namely the tourist trade. The summer in this collective is presented, when Moonee and her friends, such as Scooty, are out of school and are left largely to their own devices while self-absorbed Halley does whatever she wants, often just staying in the room watching TV. Halley is supposed to look after Scooty, the son of Halley’s friend Ashley, they who live in the unit immediately underneath Halley and Moonee’s, while Ashley is at work at a local diner. In turn, Ashley pilfers cooked meals from the diner to feed Halley, Moonee and Scooty. Over the course of the summer, Halley systematically begins to alienate one by one the people who are her unofficial support by responding with that disrespect to anything she feels is against her. As such, Halley begins to take more and more extreme measures to maintain the life she leads with Moonee.

I think the director himself said it best when he described the experience he wanted to create in making this film. So many people are concerned with seeing a story in three parts. Setup, confrontation, and resolution. But this is story about summer vacation. It so happens that the summer vacation is set in ghetto motel right beside Disney World, but it is a summer vacation nonetheless. Not everyone has two parents, a house, and food on the table.

And while the subject alone should be enough to hold your interest, what makes it even better is the sheer weight Baker holds up by documenting, studying and paying attention to the details of these peoples lives. Halley is on a road to ruin, and Moonee is likely headed in the same direction, but just right now, for this moment, we get to see her and her friends having fun in the environment they live in.

Pros: There is so much to reflect upon in the way that the movie opens, over a simple act of rebellion, later ending on the same sour notes. There is no bowtie with which we can neatly resolve this story, but where a movie like The Place Beyond The Pines relies heavily on obvious drama to drive home the point of the family ties that bind, The Florida Project is that much wiser in it’s presentation.

Cons:  It’s difficult to believe that Halley is so devoid of feeling that she is incapable of wrestling with personal demons. In an era of social media darlings, Bria Vinaite has quite literally been shopped from Instagram.

I know in my hearts of hearts why Willem Dafoe was given a best supporting actor nod, but I can’t help but be enamoured with the characterizations between newcomers Bria Vinaite and her would-be daughter Brooklynn Prince. Perhaps it’s the raw nature of their performances, and perhaps it’s that it reminds me a lot of my favourite director Richard Linklater (and how I wish he had made this movie instead of Last Flag Flying), but either way The Florida Project has captured a moment in time, and quietly asked us to observe the forgotten poor outside a magic kingdom.

Points of Interest: The Florida Project was an early production pet name for Disney World. The motels filmed are true-to-life locations and many of the people seen during the film were actual residents and staff of the buildings. The final scene was shot on an iPhone as Disney World has strict rules about filming without park consent.

I can’t help but vote for a film shot by a guerilla director, and one which sheds light on a group of people often ignored by the greater population. While they live in great poverty, the joy they find in life is encouraging.

I think I may have found a new hot director to watch, keep your guard up Linklater, the new kid on the block just might supplant you sooner or later. And I’m not sure if it’s obvious you should watch this movie yet, but please do yourself a favour and check it out.

And if you want to see another timotheories cast member who’s super excited to share a film review, just take a look-see at one Chris Murphy. He has a solid Watch Culture video review on Patty Jenkin’s Wonder Woman, which I can almost assure you will convince even the most stubborn to give it a shot.

What do you think though? Is The Florida Project worthwhile? Did we miss the mark on our Wonder Woman review? Hopefully you have good things to say, but either way… Check it out! And remember… Like! Comment! Subscribe!