Blues rock has always had a soft spot in my heart. Led Zeppelin, The Rolling Stones, The Doors, The White Stripes, The Black Keys, and so on and so forth. But what happens when you mix in the Canadian wilderness and hit blend – does the era of cool translate for our polite sensibilities? 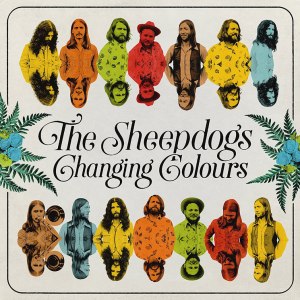 The Sheepdogs are a Canadian blues rock band originally from Saskatoon and founded in 2006. Lead by singer and guitarist Ewan Currie, backed by his brother Shamus on keyboards, trombone and tambourine, Sam Corbett on drums, bassist Ryan Gullen, and Jimmy Bowskill on lead guitar. They have since recorded six studio-length albums, which is a pretty impressive schedule of one year on, on year off.

I have their third (2010’s Learn & Burn) and fourth (2012’s The Sheepdogs) albums in my own personal collection, but I believe they would benefit from proper and complete catalogue representation on timotheories.com.

Changing Colours is a great record, I wish it had shown up in those summer weeks of 2017 when all of my possessions were packed up, and I was living out of a room in my best friends house. That music would have carried me through those two hectic months. Up In Canada would’ve become my anthem, and I would even have petitioned for it to replace our national anthem! It’s that newsworthy. But you see, that’s the thing about Changing Colours, all of this record’s tracks have the capacity to be released as singles.

Pros: This album is incredibly pleasant to listen to. It’s a summer album, that plays nice with the other seasons. AND they’ve managed to extend their range to incorporate more sonic safe choices then previous efforts.

Cons: A symptom of their musical stylings, they never quite shake the sounds of Crosby, Stills & Nash, The Beach Boys and a host of other sounds I’m sure you’ll recognize along the way. Proceed with caution if you hate drawing from the past.

Points of Interest: Newcomer Jimmy Bowskill officially joins the ranks of The Sheepdogs on this record. A band for the people, their bassist Ryan Gullen regularly polls the fanbase and observes which songs are getting the most streaming airplay, influencing what charts as a single.

These guys are absolutely guilty of making “good-time” music, and by pulling most of their influences from the safety net of 1970s rock and roll, they successfully emulate the sounds of the day, while pulling it into the present. It’s only slightly odd that despite a lack of originality in most places, I can’t help but enjoy what I’m listening to.

Have you ever heard the theory that we’re drawn to certain types of people because of a natural chemistry and as such, those relationships typically last because of their familiarity? The Sheepdogs have that instant friendship quality, and while it might seem like a pure emulation of the past, I’ll argue instead that it’s a display of their immense talent. That they can match sounds of the past, but still maintain genuinely their own voice.

There is just something incredibly appealing to me about pared down music, it’s heartfelt, timeless and can be played no matter how you choose to spend your listening session(s). That’s why I thought transitioning from The Sheepdogs into a video review on Andrew Bird was an apt choice.

If you haven’t listened to the Echolocations series yet, you are in for a treat creative cuties.

Thanks for taking the time to read the review, watch the video and hopefully you’ve left a comment or two. If you liked what you saw, click on the like button, and even better, subscribe to the channel! Come back tomorrow for a film review about bravery and wildfires.