I will never claim to be an expert on sociology, politics or any of the major social sciences, but I’m acutely aware of their importance, and I hope that by providing reviews on films like Stronger, my voice can contribute towards a positive world view, curbing hate and reducing ignorance about these kinds of social issues.

The movie does a pretty damn good job too though. 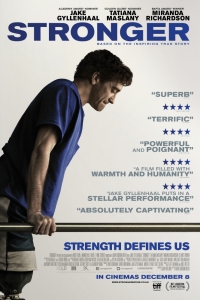 David Gordon Green is an American filmmaker, best known for films like Joe, Prince Avalanche, George Washington, and All the Real Girls. He’s also done some pretty bad comedies – The Sitter, Your Highness, Pineapple Express. Thankfully, Stronger fits nicely into the biography drama camp, where Green can really shine and do his coming of age (enlightenment) thing well. That said, I just read that he is going to direct the next Halloween instalment with Danny McBride, so maybe he’s still figuring out his film identity.

He could take some notes from his characterization of Jeff Bauman…

Taken from Wikipedia and modified…

Jeff Bauman (Jake Gyllenhaal) is a well-intentioned but underachieving Boston native who works at the deli counter of a Costco and lives in a small two-bedroom apartment with his alcoholic mother, Patty (Miranda Richardson). One day at the local bar, Jeff runs into his ex-girlfriend Erin (Tatiana Maslany), who is attracted to his kindness and charm but finds herself constantly frustrated by his lack of commitment. After learning that Erin is running in the Boston Marathon to raise money for the hospital she works at, Jeff asks every patron in the bar to donate and then promises Erin he’ll wait at the finish line for her with a big sign.

The day of the Marathon, Jeff scrambles to make it to the finish line on time but reaches it just before Erin reaches the finish line. As she approaches a bomb goes off right where Jeff is standing. After being rushed to a hospital, both of Jeff’s legs are amputated above the knee. When he regains consciousness, Jeff tells his brother that he saw the bomber before the explosion. Patty calls the FBI, and Jeff is able to give them a description of Tamerlan Tsarnaev. Local authorities capture Dzhokhar Tsarnaev days later, and Jeff is hailed as a hero.

Jeff struggles to adjust to his condition as well as his newfound fame. Patty books several interviews and constantly surrounds Jeff with news reporters during his rehab sessions which Erin, who has since rekindled with Jeff, objects. Jeff and his family are invited to the Stanley Cup Finals by the Boston Bruins who ask Jeff to wave the flag during the game’s opening ceremony. The crowd triggers traumatic flashbacks from Jeff, and he breaks down in the elevator. Erin comforts him and insists he talk to his family about the fragility of his mental state and the impact his newfound exposure is having on it. Later that night they make love for the first time since his injury.

Patty books Jeff an interview with Oprah Winfrey without telling him causing Erin to speak up and tell her that the constant media attention is intensifying Jeff’s PTSD. After an argument between Patty and Erin, Jeff finally admits that he does not want to do any more interviews. Patty, disheartened, tells him that she only wishes for the world to see how amazing her son is. She soon begins enabling Jeff’s worst tendencies including his laziness and affinity for drinking. He begins missing physical therapy appointments due to long nights of drinking usually with Patty equally as drunk. Erin, who has since moved in, finds Patty blacked out on the couch and Jeff in a bathtub unconscious and covered in vomit. The next day she snaps at Patty for her selfishness and negligence before calling Jeff out for his self-pity and refusal to stand up to his mother. She storms off leaving Jeff and Patty to drive home alone.

That night, Jeff blows off Erin to drink with his brothers at a bar. Two patrons at the bar begin asking Jeff questions about the bombing insinuating that the event was a government conspiracy to start a war in Iran and Jeff was paid to look like a victim. Insulted Jeff and his brothers initiate a bar fight with the patrons. Erin picks him up later that night and tells him she’s pregnant. Jeff begins to panic and tells her he isn’t ready to be a father causing Erin to scold him for constantly running away from his problems. She leaves him in the car without removing his wheelchair from the trunk, enters their apartment, and packs her things. Jeff crawls to the apartment door and has a PTSD flashback of the bombing in its entirety.

Jeff meets with Carlos, a man who cared for him in the immediate aftermath of the bombing saving his life. Carlos tells him about his son, a marine who died in Iraq. After attempting suicide Carlos was forced to attend his son’s funeral in a stretcher. His younger son, unable to cope with the death of his older brother and the constant state of pain his father was in, killed himself. Carlos confides that saving Jeff helped him make peace with the death of his sons and the blame he placed upon himself because of them. Jeff begins to understand that his will to live in the face of adversity is what both comforts and inspires people. He stops drinking and begins to take his rehab more seriously. He leaves Erin a voicemail apologizing for his behavior finally taking full responsibility for his immaturity and fear of commitment. A few days later he and Carlos throw out the first pitch at a Red Sox game where he meets Pedro Martinez. Erin watches at home and smiles. After the game dozens of people come up to Jeff and tell him how and why he has so heavily impacted their lives.

He and Erin meet at a diner where he walks with his prosthetics for the first time without assistance. He tells Erin he loves her, to which she replies “Good.” He grabs her hand and smiles.

It really does an excellent job of using a real story to showcase a survivor’s journey towards acceptance of his new life, and luckily for us, it hides very little of Bauman’s personal life. He has regular flashbacks of the bombing, his eyes hiding ghosts and his arms curled up in pain. His emotional voice often comes through girlfriend Erin, until the very end anyway.

Pros: It’s a series of moments but it never feels like a made for TV mini series, and Tatiana Maslany does an amazing job as the female lead. I hope to see more of her in the future.

Cons: I wish there weren’t patriotic shots of flags and orchestral music that hit your heart strings at key moments. A little obvious for my taste.

Featuring some solid character actors performances on top of all the emotional core, Stronger is a film about a life examined, dissected, and reassembled, not whole, but as a sum of its parts. And it’s incredibly satisfying to watch a story about tragedy, without glossing over the ugly parts and managing to avoid cliche of overcoming adversity. Jeff Bauman is no hero, he only plays one on tv.

I only wish I had seen it in theatres, because I would have recommended the shit out of it way earlier on then I am now. So many bio pics attempt the impossible, being dramatic without overexerting themselves, and this story about an amputee does it one better. He’s a slob, self-destructive, and not morally sound either, but Bauman is surrounded by so many people just as flawed as him, you can’t help but root for a change in his heart.

Overall this is a film that works incredibly hard at avoiding all the well known cliches, and it’s a cinematic treat to watch. I highly recommend you give it a shot, and set aside any preconceived notions you might have about triumph films, bio pics or Jake Gyllenhaal. This is a seriously good movie. And that’s not a theory.

Speaking of visual treats, have you seen The Grand Budapest Hotel? No, well check out this Watch Culture video in that case. And even if you have seen it, Mike and I have some great reminders of why this needs another viewing. I personally consider it to be Wes Anderson’s best. But tell us what you think! Leave a comment, share the video, and don’t forget to subscribe, for more great reviews.