How does that old song go? The road is long, with many a winding turn, that leads us to who knows where, who knows where. A common theme in rock music, but one that only the worthy get to call their own. Luckily for us, this week’s review zeroes on one of those legends.

The Rolling Stones – ON AIR 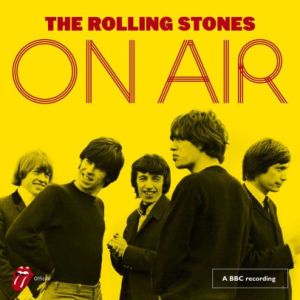 I’m going to do my best to sum up who The Rolling Stones are without doing them a great injustice… formed in London, England in 1962, the original lineup was Brian Jones on guitar and harmonica, Mick Jagger on lead vocals, Keith Richards as guitar and backup vocals, Bill Wyman bass, drummer Charlie Watts, and Ian Stewart tickling the ivories. Over the years, the lineup changed to accommodate tours, and bandmate lives, but Mick, Keith, and Charlie all stayed true to the group. With thirty albums under their collective belt, these gents have maintained their sound and still managed to be relevant by playing blues-laden rock tracks.

One of the key events of the 1960s was the British Invasion of popular bands into the American lexicon of rock and roll. ON AIR is a compilation album which samples from some of their best work captured at the BBC between 1963-65, though it doesn’t represent their best work by any means, rather a band on the long road to success. And I’m not talking about the albums Beggars Banquet, Let It Bleed, Sticky Fingers or Exile on Main St either – this album has been somewhat repurposed from the initial recordings on the radio shows featured in the liner notes.

Saturday Club, Yeah Yeah, Blues in Rhythm, The Joe Loss Pop Show, Top Gear, and Rhythm & Blues all intended to showcase The Rolling Stones raw and unedited. Luckliy for us, someone was on hand recording these performances and capturing the development of a group of talented musicians.

It’s a lot of fun to hear Roll Over Beethoven, (I Can’t Get No) Satisfaction, and Route 66 without the polish of mixing board and sound engineering crew. But unfortunately, it’s not sequential at all. The most popular songs feature first, and so towards the end of each disc, you may have drifted off without even realizing The Greatest Rock and Roll Band in the World are still playing.

And that’s sad, because you’d miss a drawn out version of 2120 South Michigan Avenue and a sweet rendition of what would be become their true sound. I also particularly enjoyed the covers of I Just Wanna Make Love To You and I Wanna Be Your Man because they demonstrate the music heritage the songs are being pulled from, but in a particularly respectful and innovative way.

Pros: Who doesn’t love to go nostalgia diving every once in a while? Putting on the shoes of giants humanizes them, and by releasing this compilation album so closely to their newest “studio album” Blue and Lonesome, we all get a chance to swoon to Hi Heel Sneakers.

Cons: Again, don’t expect major breakthroughs in sound here. There are hints of greatness, but a lot of material covering the past too.

Points of Interest: There are eight previously unreleased tracks on this album, but it’ll be difficult to pick them out, given that The Stones haven’t disclosed that information to us. This album features Brian Jones front and centre, before he made the move to dealing with administrative duties.

Few bands have had such a great impact as The Beatles, Led Zeppelin, and The Rolling Stones, and only the later still exist to give us new records and tastes from the paste. That an album like ON AIR has been released is great evidence for the wisdom of experience and the power held within discipline. This band would go on to create some of the most fantastic rock and roll tracks, but their love for blues and technical skill is apparent throughout this record.

I hope it’s obvious by now that you should pick up a copy of this record for yourself. Whether you are a long-time Stones fan or merely a lover of history, ON AIR will both round out your music collection and teach you something about quality musicianship. It’s just a little theory I have.