Super heroes have been dominated by male leads in film since almost the beginning of their celluloid representation. Which is odd, given that there are more than enough female super heroes to go around, with compelling story arcs of their own to be had.

This is one of those times. 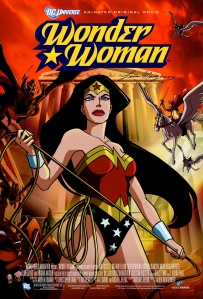 Lauren Montgomery is an American animated film director and artist. Aside from directing the Wonder Woman film I’m about to revisit, she also had a hand in Green Lantern: First Flight, Superman/Batman: Apocalypse, Justice League: Doom, and co-directed Justice League: Crisis on Two Earths and Batman:Year One. A fairly young director still, Montgomery has been drawing from a young age and is heavily influenced by Disney, Bruce Timm of Batman: The Animated series fame, and anime.

Wonder Woman is her first directorial outing. And to be frank, it’s quite entertaining. But I’ll let the plot drive some of this demonstration for me first.

The story opens by explaining that the eternally youthful Amazons and their queen Hippolyta (Virginia Madsen) were granted the island of Themyscira after defeating Ares (Alfred Molina) and his monster army in battle. Hippolyta even beheaded her and Ares’ son Thrax in battle, who was begot from rape.

Hippolyta would have killed Ares too in battle, but  his father Zeus (David McCallum) stopped her from the action. Instead, Hera (Marg Helgenberger) bound his powers with bracelets that could only be opened by another god and the Amazons held Ares in prison cell indefinitely.

Later, Hippolyta was granted a daughter with Zeus’ blessing, and Princess Diana (Keri Russell) was born from sand and blood.

Over a millennium later, an American fighter pilot, USAF Colonel Steve Trevor (Nathan Fillion), crash-lands on the island. Steve and Diana meet and fight, and she defeats him, taking him to the Amazons. Interrogated with the golden lasso, they learn he is not an enemy. An emissary will be tasked to take him home. Diana volunteers, but her mother argues against that notion, to which Diana defies the order and participates in the emissary contests with a helmet to hide her identity.

In the world of man, Diana starts an investigation that will eventually lead her to Area, by way of the underworld. Diana attempts to stop Ares, but harpies knock her out and Trevor saves her instead of stopping Ares. Elsewhere Ares persuades his uncle Hades (Oliver Platt) (who has made Thrax his slave) to remove the braclets, to which Hades agrees.

When Diana wakes up, she is furious that Trevor saved her instead of stopping Ares, but Trevor makes good points about the Amazons isolation and ignorance, winning her over.

Ares and the Amazons battle in Washington, D.C. and Ares raises the undead to his side, but Artemis is given a chant from her dead sister Alexa to redeem the dead and remove Ares’ command. Ares promptly destroys the undead while Hippolyta faces Persephone in combat and kills her. Not before Persephone points out that by hiding away, the Amazons never got to know men and be whole women.

Ares and Diana finally square off and Diana narrowly outmaneuvers and beheads him just as Hippolyta beheaded Thrax. Diana and Trevor share a kiss and we see in the Underworld that Hades has enslaved Ares just as he did with Thrax.

Hippolyta  determines that Diana should be the official Amazon misses emissary and sends her back to New York. Trevor and Diana become a couple and Diana is now by the world as Wonder Woman.

The animated Wonder Woman follows many of the same notes as its 2017 live action version, but interestingly enough, it has different examples of humour and even more in the way of action sequences. Wonder Woman rejects the notion of a secondary role for women in action/ adventure stories, she is her own heroine.

Pros: It’s fast paced, well animated and the voice acting is excellent in almost every instance, though you never feel like are expected to know tons of her back story. Keri Russell, Nathan Fillion and Alfred Molina in particular are a treat to watch in action.

Cons: Aside from the complex issues of gender, there are dialogue moments which are difficult to swallow (ie. “You’re starting to sound like a woman”), and it is a bit jarring to hear Rosario Dawson’s voice and see a white woman in her stead.

Points of Interest: The movie originally received an R rating from the MPAA, though most of edits came from minor changes to the battle scenes. This is the second time Keri Russell and Nathan Fillion have worked together, after Waitress.

While the story has clearly stuck to the visual aesthetics of comic book history, we are never treated to a sexualized or naive Diana Prince – she always carries herself as a patron of truth, justice and freedom. In fact, there is little in the way of narrative calling her out based on gender. The story is strong, and ripped out of the Wonder Woman’s past, so expect to feel that higher sense of morality by film’s end. It’ll be a wonder if you don’t.

I’ve now seen both this film and the live-action version, and while I love the weirdness of comic books, the 2017 film is something to behold. Yet, that doesn’t make this story irrelevant. It touches more on the greek myths of which Wonder Woman is based, and in some cases, has even better mature humour. If you’ve enjoyed any of the DC Universe Animated Original Moves, you should give this one some time.