Unforgettable. That’s what many of us wish to be. But if we’re all important, then none of us are.

And that’s quite the joke. 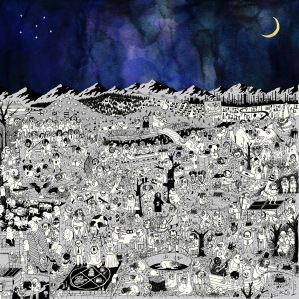 Joshua Michael “Josh” Tillman, sometimes known as J. Tillman, and especially in this case, as Father John Misty, is an American singer/songwriter and instrumentalist. He’s been making albums since 2003, with the first eight being under the moniker of J. Tillman. This is the third outing of Father John Misty, preceded by the album I Love You, Honeybear; an affecting and self-dissecting grand gesture that is both smart and heart.

So it makes sense that Pure Comedy would simply raise the up stakes and let us walk on through into themes like post-apocalyptic landscapes, religion, pop culture, and politics. And it does. Hard. Hardcore even.

And maybe it’s my undying love of 90s bands like Harvey Danger, The Presidents of the United States of America, Weezer, Tonic, Jimmy Eat World, Semisonic, Everclear and Third Eye Blind, but doesn’t this guy sound like he could fit right in with those blokes? Without sounding like he was doing the recording itself in the 90s of course. But maybe it’s the confessional nature that really draws me in and makes me want to sit down and pray with him.

With a runtime at about 80 minutes, it’s almost impossible to sit through this in one go (read:meditating for the win), and even more difficult to break it up into separate ideas, though I am going to give it a shot.

Tillman is not alone in his criticisms of world views, namely the problems with our planet and the people that inhabit it, but his dark humour calls back to comedians of the 1970s like Peter Sellers and Monty Python. He wants to be seen as a patron saint of satire, but he is willing to self-efface to earn that mantel. At it’s centre point is the dark and sometimes funny Leaving L.A. It isn’t the best song on the album, but it definitely serves the purpose. The comedy of errors that we call life.

I can personally appreciate the health mix of existential though dashed into this record, because Tillman is no stranger to exploring themes within Pure Comedy. Both an epitaph to the process of art and a lover letter to making music, there is way to much complexity going on here to digest in my ever-so-brief review of it. Take a look at the album artwork for instance, a shining example of the detail involved in a life lived full.  We will likely never experience all of the same things as another person, but that doesn’t mean Birdie can’t try to describe utopia for us.

A criticism without judgment, Pure Comedy is a sermon Father John Misty should be proud to share.

In listening to this record, I cannot help but think of The Comedian from the graphic novel Watchmen. Toward the end of his days The Comedian unravelled a global plot to change the world. One which would involved the slaughter of millions so that billions could united together against a common, if not fake, threat. It’s all a joke he said, just before he was murdered.

The real joke is that Josh Tillman hasn’t even begun his decline yet – this might just be pure gold.