Why is the stories from our youth always seem to have the most impact on us as adults? They leave a legacy all their own and one which compounds over and over again, creating ripples in the lives of those around us. 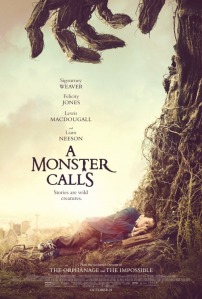 Juan Antonio García Bayona, better known as J. A. Bayona, is a Spanish film director. He is the guy responsible for The Orphanage, The Impossible, and now A Monster Calls. Which should probably have been called The Monster. Just saying. Anyway, he is now set to direct the fifth instalment of the Jurassic Park film series, Jurassic World II.

Bayona is now going three for three, so I’d say it’s a safe bet that this is a heartfelt and glowing review. Just look at the plot, if you don’t believe me. Taken from Wikipedia…

Young Conor O’Malley (Lewis MacDougall) must face his mother’s (Felicity Jones) terminal cancer, his strict grandmother (Sigourney Weaver), his estranged father (Toby Kebbell), and his school bully, Harry (James Melville). One night at 12:07 a.m., Conor encounters the tree-like Monster (Liam Neeson), who tells Conor it has come to relate three true stories, after which Conor will tell the Monster his own story, the truth behind his nightmare. They continue to meet at 12:07 to tell the stories.

An old king who has lost his entire family, save a young grandson, remarries a beautiful young woman. He dies before the prince comes of age, and many believe the queen poisoned the king. Not wanting to hand the kingdom over to the prince in a year, she plots to marry the prince and remain queen. The prince runs away with a farm girl he loves. They stop and sleep under a yew tree (the Monster), but in the morning he finds the young woman murdered. The prince tells the villagers that the queen, a witch, must have done it, and they rally to overthrow her. The monster awakes and joins the mob. Before the commoners can reach the queen, the Monster carries her away to a far-off land where she lives out the rest of her life in peace. Though she was indeed a witch, she did not kill the young woman or the king. The prince had murdered the young woman in order to inspire his people to back him into overthrowing the queen.

An apothecary follows old traditions and beliefs, using herbs and brews to cure ailments. His business becomes less popular as a local parson tells his congregation not to accept the apothecary’s old ways. When the parson’s two daughters become sick, the parson asks the apothecary to save their lives after all other resources are exhausted. When the apothecary asks why he should help a man who has turned people away from his skills and denied him the yew tree, his best source of healing ingredients, the parson promises to give him the tree and deliver the parishioners to him as customers. Yet the apothecary says that he cannot help, and the girls die. The Monster awakens from the yew tree to destroy the parson’s house and raze it to the ground as punishment.

While the apothecary was a greedy man, he was a healer and would have saved lives, including the girls’, if the parson had allowed him his way of life. The parson was a man of belief, but was willing to discard his beliefs when they were in the way. The healing traditions followed by the apothecary require belief in order to work; without the parson’s, the apothecary was unable to treat the two girls. Belief is half the cure.

A man was invisible because no one ever saw him. Tired of this, he summoned the Monster to ensure people would take notice.

Conor must confront his nightmare to tell the fourth story. His mother has been pulled to the edge of a cliff by a sudden collapse of the ground, and Conor must hold her hand to save her from falling. Eventually, his grip fails and his mother falls. The Monster forces Conor to confess the truth: Conor loosened his grip on purpose. While he could have held on longer, he let go in order to stop the pain of having to hold on. Conor ultimately understands the complexities of human beings, and that though he doesn’t want his mother to die, he understands it is inevitable and something he must accept, and that he wants the experience to be over.

After this, Connor returns, with the Monster by his side, to comfort his mother one last time, and she dies at 12:07. He returns home with his grandmother, who becomes caring towards him and gives Conor a room of his own, a room that used to be his mother’s. In the room he finds his mother’s old art book, which depicts the characters of the stories that have been told by the Monster, and a drawing of his mother as a child with the Monster.

Sad, thoughtful, and penetrating, A Monster Calls tells a story that we can all relate to, or at the very least, one which means something for the kid in all of us. I don’t know about you, but films which feature the loss of a parent always get me tearing up, but whether that is true for you or not, I can say with damn near perfect timing that Lewis MacDougall has the acting chops necessary to get you to feel the pain of bereavement. It simply is worthwhile.

Pros: The message is accessible, ushering away the monsters of youth with wonderment and fateful stories. Even the darkest moments of the film are made brighter by the authenticity of it’s narrative. Lewis MacDougall shines.

Cons: It can be a struggle to see Sigourney Weaver as a grandmother, and the bullies of the film feel more like pieces to be moved then real characterizations.

Points of Interest: Liam Neeson appears as Conor’s grandfather in the photo of Conor’s mother as a little girl being carried by her father. The sixth time that Liam Neeson has voiced a CGI character –  three times as Aslan in the Chronicles of Narnia franchise, Phango in Khumba, and Good Cop/Bad Cop in The Lego Movie.

Too old to be a kid, too young to be a man. That’s how this films opens on the story of Conor, who is watching is mother die of a terminal illness. Where the fantasy intersects with reality is the beauty of this story, and it reminds me of the widely underrated film, Bridge to Terabithia, which also took advantage of childhood fantasy as a device for growing up amidst personal tragedy.

The stories the Monster tells are really and truly for Conor’s sake, to aid him in his healing. It’s all beautiful and symbolic given that the Monster is a yew tree (known for it’s healing properties), while the Monster and the stories he tells are in fact derivative of Conor’s mothers own childhood drawings.

Most of all there is something moving in knowing that Conor doesn’t understand everything yet, and that might not ever, and the theory that monsters aren’t always what they seem.