But what do you do if a movie is critically acclaimed, everyone loves it, and all you feel is an underwhelming meh when you think about it?

That’s the question on my mind today dear readers, and we’re about to find out why. 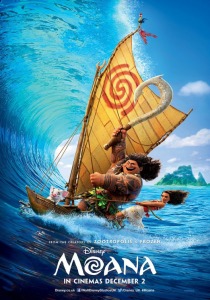 Ron Clements and John Musker have directed a number of Disney Classics, from The Great Mouse Detective, The Little Mermaid, and Aladdin, to less popular choices Hercules, Treasure Planet, and The Princess and the Frog. Don’t get me wrong dear readers, those last three movies are all still good movies, just not as compelling as the first three.

Ron Clements and John Musker also directed Moana. Which has been critically acclaimed and much beloved by the general public. But I am just not that impressed by it.

Co-directors Don Hall and Chris Williams have a much smaller portfolio, having both worked on Big Hero 6, with Williams co-directing Bolt, and Hall co-directing Winnie the Pooh.

Disney has a history of bringing on several directors for the their films, given the huge teams of people needed to animate their films. Ultimately most of the weight falls on Clements and Musker, and they seemed like the logical choice. But I personally feel like they’ve lost their touch and haven’t really got it back. Heck, they may never get it back.

In the past I would have said that this was largely due to how dull the jokes felt and how ridiculous the characterizations were, but the reality is that those classic Disney films suffer from those problems too. No, the problem with this film is that it plays too safely to a well worn narrative, this time self-congratulating its team members for heavily researching their characters people they portray, in the hopes that they can serve up a fresh batch of disney princess without doing anything innovative.

It bothers me to no end that this feels like yet another rip on Hawaiian culture, while profiting from the people it represents. Yes it’s beautifully depicted and the songs are lovely, but who cares about these generic characters?

Anyone remember Lilo and Stitch? That was an entertaining movie and it was, as they say, authentic. Am I the only one that finds it ironic in one movie breath we hear Lilo say “Ohana means family. Family means nobody gets left behind,” and then in another movie breath we get to witness Moana completely go against tradition like oh so many heroes and heroines before her?

And let’s not forget the literally showstopper of a crab voiced by Jemaine Clement and called Tamatoa. He halts the story but good during his time on screen. Which is frustrating because he could have been a really fun supporting character.

Last, but certainly not least when we finally do meet Maui, he’s certainly not a caricature, but he’s definitely not likable either. He’s a bit of jerk with a thin character arc.

I wish the hear of this movie had a better body to house it in, because never really engaged with me at any particular point.

Pros: It’s refreshing to see a lack of a love interest in a Disney story  as done previously in Zootopia and Frozen. And the visuals are amazing. It truly feels like a getaway from the typical fare.

Cons: While it does move away from the love interest trope, it relies so heavily on other established ideas that it becomes evident fairly quickly where the story hasn’t taken any chances. It’s characters are not one-dimensional, but they aren’t engaging either.

Points of Interest: While the film is entirely digitally animated, Maui’s tattoos were hand-drawn into the animation, making Moana a first in over five years to feature true animation. Moana is the first Polynesian of the Disney Princesses.

I realize now that I didn’t get you much of a summary of the film, and for that I am kind of sorry. I really needed to go on a rant about this film. Because I don’t want more them to be made. 100% we should continue to support female protagonists who aren’t dictated by their personal relationships, but that doesn’t mean they need to revisit all of the other tropes that male leads have done over the past 100+ years of film.

What do you think? Did you like Moana? I hope I haven’t been too harsh on this movie. It represents a positive direction, and if Disney can help change minds with its depictions, I’m all for it. I just want to see Moana fight an internal battle or two, have some nuance in her performance. But thats my theory, after all.