I’ve always wondered how much of our identities stem from ourselves, and how much of them come from the world that surrounds us.

Are we peerless souls encased in moonlight, shimmering ever so slightly in shades of indigo as the night wears on? Who is you? 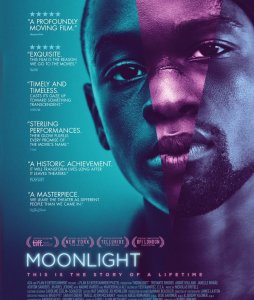 Barry Jenkins is a an American film director and writer who has made two films thus far in his career – Medicine for Melancholy and Moonlight. There is an eight year gap between those two films, which I find kind of unsettling, but it managed to get the movie tons of accolades, so who am I to judge on his methods of working?

Moonlight is an interesting film, to say the least.

If we were to be honest with ourselves, would we not all have very different identities at various stages of our lives? Stages which defined us and drove our purpose forward, not matter the personal cost? That’s what Moonlight asks, all through the lenses of vulnerable gay black man, while simultaneously telling a universal story about identity. It’s intelligent, beautiful, difficult to stomach at times, and it is both timely and timeless.

The first part focuses on Little, a little boy named Chiron who is constantly teased by other children, but who receives little help from his drug-addicted mother. One day he is found by Cuban drug dealer Juan (Mahershala Ali), who decides to let Little stay with him and his girlfriend Teresa (Janelle Monae) for the night. Eventually Little tells Juan how to find his mother Paula (Naomie Harris). Juan spends a lot of time with Little, teaching him to swim and to become his own man, but Paula continues to be a bad influence on the boy, calling him a faggot at one point. Juan is ashamed when Little asks him if he ever sells drugs to his mother.

The second part is about teenaged Chiron. Frequently bullied at school, Chiron spends time between his now prostitute and drug-addicted mother and the widow Teresa, as Juan had died previously. Juan is friends with Kevin (Jharrel Jerome), but has a dream in which he sees Kevin having sex with a woman. On a different night the two friends smoke a joint together, discuss the nickname of “Black” that Kevin has given him, and as the conversation heats up, the two kiss. Then Kevin masturbates Chiron. Then at school, the bullies convince Kevin to punch someone, and Chiron is chosen. Kevin punches Chiron several times, and the bullies assault him, but Chiron won’t reveal the identities of who attacked him. The next day, Chiron assaults one of the bullies and is arrested.

Finally the third part of the story is about an adult Chiron who is now a drug dealer and goes by the street name Black. His mother is in drug treatment and wishes to reconcile, but he ignores her. Then one day an adult Kevin (André Holland) contacts him, leaving a message in which he apologizes for what happened in high school. Black decides to visit his mother and they hash out their feelings. Black then travels to see Kevin, who works at a diner, but Kevin can’t seem to get many details out of Chiron. The pair drive back to Kevin’s and Black finally admits he is not happy nor has he had another sexual encounter since high school. Kevin comforts him, and Chiron thinks back on childhood.

Pros: This movie is not full of big speeches or talking heads explaining feelings. It is full of real dialogue and deep silences, the conflicts of masculine identity are very real here. Stories of identity have been told like this before, but not in this way.

Cons: It has such a strong start with the first and second two parts that the harsh drop-off in intimacy and plot in the third act make up for it, but man do those last twenty five minutes feel strained at key points.

Points of Interest: The film is based on the unproduced play “In Moonlight Black Boys Look Blue” by MacArthur Fellow Tarell Alvin McCraney. Two firsts in the history of film, Mahershala Ali is the first Muslim person to win an Academy Award for acting AND this is the first LGBT film, and the first film featuring an all black cast, to win the Academy Award for Best Picture.

Jenkins is lucky. Many directors have tried and failed to capture such a wide audience with a powerful story, and this is only his second film ever full realized. Moonlight might represent a win for the LGBT community and another for the black community, but more importantly I think it represents a willingness for change on the part of decision makers within the film community. And as already mentioned over and over again, Moonlight is an excellent story of identity. It asks hard questions about exposure.

Do I think this is a perfect film? No. But do I think it’s an excellent study in human nature. So often in life we portray versions of ourselves for others, never fully aware of what we look like to the world we live within. Hopefully the soul is what we see at the end of the day, but only moonlight can cast off those shadows that well. At least, that’s my theory.