Synergy. The interaction or cooperation of two or more organizations, substances or other agents to produce a combined effort greater than the sum of their separate effects.

Seeker. A person who is attempting to find or obtain something. 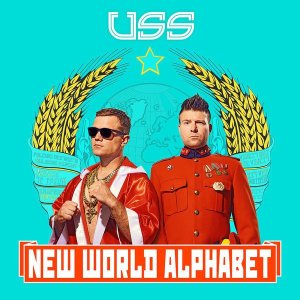 Ubiquitous Synergy Seeker (USS) is a Canadian alternative rock musical duo – namely a musical duo that is sonically out there. They got their start performing in Toronto, Ontario and the band includes the talents of vocalist, guitarist, and ehru player Ashley Buchholz (aka Ash Boo-Schultz) backed by turntable and hype man Jason “Human Kebab” Parsons.

Fun fact, as DJ Human Kebab, Parsons hosts not one but two alternative rock radio remix shows in his spare time. The first one began four years ago in 2013 on Edmonton, Alberta station SONiC 102.9 with the show SubSONiC. Last year Human Kebab got another gig with Rock Paper Mixers on KX 93.5 in Laguna Beach, California.

As already mentioned, the USS sound is an eclectic mix of guitar, beats that include drum AND bass, and 2-step rhythms that bleeds into electro-pop. Filled to the brim with energy, and all kinds of enthusiasm for musical hard work, New World Alphabet is the sophmore album that follows 2009’s Questamation. That’s right, their second full-length effort comes eight years later. Yes, there were some EP’s inbetween, but nothing quite beats a record you play over and over again for at least an hour. Though admittedly this one doesn’t quite meet that mark – It’s barely half an hour long, after all.

But maybe that isn’t a bad thing. Their music is after all infectious, and the first single, Work Shoes starts the eight track album on a high note. I saw them live in the summer of 2013 and this energy transfers well whether in studio or playing to an outdoor arena. Work shoes fits like, well, like a well worn shoe. Followed up by the track Who’s With Me, USS keep the energy going and maintain the positive vibes which we’ve come to to love, warning us not to paint their rainbow grey. Domino shows the other side of the band, that quizzical and abstract thinking that I’ve come to love.

California Medication makes waaaaay more sense now that I know Human Kebab DJs for a Laguna Beach radio station, but it’s effectively a call to action to escape our harsh Canadian winters and have fun somewhere in the sun. Sounds just peachy to me.

Alien is probably my LEAST favourite track of the moment, but I’m willing to bet it’ll grow on my over time if I let it. It’s probably the striped down production of the track that’s throwing me off, but I wish there was more oomph behind it. Track no. 6 gets us right back on track with Us. Say that three times fast. But don’t let that fool you because this is a slow jam, featuring some peanuts.

Broken Smile and Vulcan close out the album, and they shouldn’t be missed. Broken Smile is probably my favourite song, but I won’t say anything else about it. Vulcan is haunting too.

Other reviewers will try to convince you that this is the fifth album by USS, but don’t be followed creative cuties, and accept no substitutes. This is Ash Boo-Schultz and Human Kebab at full strengh, set phasers to stun.

Ubiquitous Synergy Seeker remain clever and relevant. They are the perfect blend of Canadian witticisms and energy. They deserve all the success in the world, and I hope they obtain whatever they are looking for by combining their efforts and being everywhere all at once. That’s just my theory anyway.

There is this common saying that when you are a jack of all trades, you are a master of none.

Now I don’t know if it’s true, but well, that’s what people commonly say these days.

And if you want to be like the common people, you might just accept that misnomer and carry on with your life. That’s what Pulp would do, and it’s definitely what William Shatner would do.

But if you were to do a little digging, like me, a rebel without a pause, you might be pleasantly surprised to learn that one of the earliest uses of jack of all trades did not include that second clause of the phrase, and that one of the earliest recorded uses of the term was applied towards William Shakespeare by Robert Greene. Greene is famous primarily for a book he wrote entitled Greene’s Groats-Worth of Wit and in which attacks Shakespeare with that phrase.

The more you know eh?

So anyways, there is this notion out there that having many talents and being something of a generalist is bad while being a specialist is good. But creative cuties, let me set the record straight once and for all, rules are made to be broken.

And as I am prone to do with timotheories interviews, I’m going to prove once again that there are many paths to artistic freedom, and that I’m friends with a visionary artist that is capable of more than just the triple threat. That’s right, this gentleman can sing, dance, act, improvise, perform magic, AND do all of the functional components of theatre too. He directs, produces and writes all while running the business of his five year running company Grindstone Theatre.

Welcome to January 2017 dear readers, because I give you Byron Trevor Martin, the artistic director and founder of Grindstone Theatre, and the soon to be owner-operator of the Grindstone Comedy Theatre building located on Whyte avenue and 104 street in Edmonton. Byron is a visionary, pure and simple. And I sat down with him to explain how he’s managed to achieve so much, all while avoiding specialization in the performance arts.

Byron inherently subscribes to the the accelerated learning “20 hour” rule. Whenever he needs to learn a new skill, he squeezes in the essentials and then spends the rest of his time on what he loves – His passion for theatre and community.

A many of many hats, Byron Martin is the perfect incarnation of what jack of all trades should mean, a means to a vision. Ladies and gentlemen, I present to you episode fourteen of timotheories interviews.

And as always, if you want to check out more timotheories interviews or the Cross Talk series please visit our YouTube channel.  And please, please, please share this post and of course subscribe to both the blog and channel!

Lastly my sincerest thanks to Byron for being beautiful, beneficent, bold, and badass. See you tomorrow with an album review by USS.