Leonard Cohen left this world in both a dramatic and cheeky fashion with his final offering. He realized long ago that true music fans almost always want more from you, more emotion, more physicality, more spirituality, more presence, the list goes on. With his final album, You Want It Darker, Cohen gave us something quite visceral, but poked fun at our expectations.

This weeks album review is more of the same. 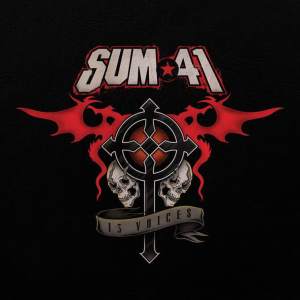 Sum 41 Is a Canadian band that makes punk, rock, and metal music, mostly of the alternative variety. What this means is that they are influenced by a number of musical genres and what that sounds like exactly has been heavily disputed by even their most committed fans.

What started as a predominantly pop and skate punk sound with their first effort slowly evolved to feature melodic hardcore on the second album and eventually stronger rock and metal treads with Chuck. After exploring those heavier themes, the group went back towards their pop punk roots for the fourth album Underclass Hero, and then dark again with Screaming Bloody Murder.

13 Voices is something altogether different. And I like it.

This is an album of recovery and reflection for lead vocalist and songwriter Deryck Whibley. After having had a brush with death from a battle with alcoholism, this is Whibley pushing back against the darkness. After all, the very first three tracks, A Murder of Crows, Goddman I’m Dead Again, and Fake My Own Death are all dialed right into that feeling of anger against himself and the drug that almost finished off the job.

This is a darker album, and while it does kind of feature a new direction, as already mentioned, Sum 41 DID try to do this back in 2011 with Screaming Bloody Mirror, though not very successfully. The reason why this is new is because it’s a return to form with the reintroduction to Dave “Brownsound” Bakash to the group, the metal backbone of Sum 41. He left after Chuck, and I don’t think the band has been nearly as good since that time. Some of my personal favourite tracks are 13 Voices, War, and The Fall and the Rise, but I think both older fans of the first three albums and current ones will be able to get behind this new Sum 41 machine.

This is a technically well made album, and while there might be some haters out there harping on Whibley for writing the songs with keyboards whilst listening to movies with the sound muted, these guys are not your typical punk group, nor your typical metal group, they managed to transcend that pop and skate punk sound. Don’t believe me? Give Breaking The Chain a listen or two and you’ll be on the Pain for Pleasure train once again (almost forgot about that alt-persona didn’t you?).

People, Sum 41 have introduced violins into their sound FINALLY after so many years, odd given that the punk group I associate with violins, Yellowcard, signed off this same year.

This album is a timeline of the redemption of Deryck Whibley after almost completely falling apart in the aftermath of the Steve Jocz quitting the band and the gruel of their last tour.

Is this album perfect? No, it isn’t. But it’s pretty goddamn good, and thankfully I’m not dead again.

This band finally did what they’ve been claiming they would do for years… ditch the pop from their sound and fully embrace the punk. Hell ,they might even be leaning more into metal for the first time since, well, ever. As someone who grow up with these guys, albeit a few years behind, this record demonstrates what was always behind the pop punk sounds and silly nicknames, a real message about dissatisfaction with society and being discounted before given a chance to do something. Empowering ourselves never felt more important than it does with 13 Voices. We may not have realized we wanted a darker Deryck Whibley, but I’m sure glad he gave it to us.