What is a die hard anyway? Common knowledge states that it’s someone who stubbornly resists change or uses tenacity to stick to a seemingly hopeless cause.

In a special Theatrical Tuesday review, I look at a movie that is truly die hard, and almost twenty five years later, is still considered to be an achievement in genre film. I think you’ll enjoy this one folks. 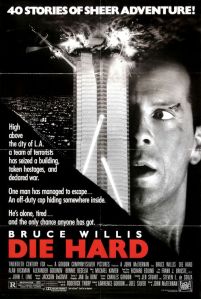 John McTiernan is an American filmmaker. He is best known for a trio of action films he directed between 1987 to 1990 – Predator, Die Hard, and The Hunt for Red October.

Though to be clear, Predator was not his directorial debut, in 1986, he did write and direct his first feature film, Nomads, starring Pierce Brosnan, also effectively starting Brosnan’s career with his own first lead role in a film. While Nomads was neither commercially successful nor critically acclaimed, it did land McTiernan the job of directing science fiction action hit Predator, starring Arnold Schwarzenegger.

Then coming hot off the success of Predator, which was second only to Beverly Hills Cop II for domestic box office in 1987, McTiernan was given an even larger budget and managed to improve his results with Die Hard. This movie has been given generally favourable reviews throughout the years and still trends in top 10 Christmas movie lists almost twenty-five years later.

It is my favourite Christmas movie that doesn’t focus primarily on Christmas – Let’s go over the plot quick.

On Christmas Eve, NYPD Detective John McClane (Bruce Willis) lands in LA to visit estranged wife Holly (Bonnie Bedelia) at her company Christmas party. McClane is driven to the party by an airport limousine driver, who waits for him in the basement. While McClane changes clothes, the party is overrun by German terrorist Hans Gruber (Alan Rickman) and team. McClane manages to skip out while the rest of the party are taken as hostages.

Gruber takes the head executive Joseph Takagi (James Shigeta), and interrogates Takagi for the vault codes to reveals that his real plan is to steal $640 million in bearer bonds. Takagi refuses to cooperate and is murdered by Gruber. McClane, who had been secretly watching, accidentally gives himself away and is pursued by the terrorists throughout the building, slowly eliminating terrorists and gaining resources, eventually getting a radio and contacting the LAPD. Patrol officer Al Powell (Reginald VelJohnson). Powell helps him from the outside, calling in the FBI.

The terrorists want the FBI shut off the building power, so that the final lock of the vault will be disabled, and they can steal the bonds. Gruber asks for a helicopter to escape, but intends to fake the teams death, simultaneously killing all of the hostages, and providing them with a distraction to leave through the basement via an “ambulance” they brought.

Shortly after, Gruber sees a news report from reporter Richard Thornburg (William Atherton) and realizes that McClane is Holly’s husband. Gruber and team send the hostages to the roof with the explosives, holding Holly as leverage, but McClane is able to get out of the situation and send the hostages back downstairs before the roof blows. The criminals head for the garage, but as McClane goes to cut them off, Gruber threatens Holly and forces his hand. With some luck, McClane is able to trick Gruber and henchman, revealing a pistol taped to his back. He shoots Gruber in the shoulder, and kills the other guy. Gruber crashes through a window,eventually falling to his death.

The movie ends with Thornburg getting punched out by Holly, and McClane and Holly leaving with limo driver Argyle.

This movie really is a textbook example of what an action/crime film should be. The plot is clear, with the setting and characters being believable. We always root for John McClane because he is the every man, at risk consistently throughout the film, though lucky and funny enough to realize he is in over his head. It is easy to sit through because the weight of the supporting cast allows us to root for McClane and Holly as they work to get out of this surreal situation.

Pros: From cokehead deal maker Ellis, to down on his luck beat cop Al Powell, the characters in this story are interesting and all work together to make a believable narrative for John McClane to fight his way through a team of criminals that are more than they appear to be. The one-liners are definitive and the action is fun to watch.

Cons: You will realize rather quickly that this is pulling on all of the right chords to get you hyped up for the story and then regret how easily you were manipulated into the plot. Paul Gleason plays the deputy chief who questions if McClane really is a cop, and he is incredibly frustrating to watch.

Points of Interest: Ironically, Bruce Willis was born in Germany, while Alan Rickman was English and most of his henchman were from other other parts of Europe. The Nakatomi tower is in fact the real head offices of 20th Century Fox, and the company charged itself rent to use the then-unfinished building while filming.

Die Hard is iconic. That much is true. But the real reason why people enjoy it, is not because of some surface level interest, it’s because it represents a style of filmmaking that sometimes gets lost in a franchise, suspense and awe. It provides us with intelligence from all of it’s characters – we see minority groups and women being represented in a positive light. It’s an amazing achievement.

McClane is beaten up, shot at, wounded (both in the shoulder and his shredded bare feet) but he continuously comes back, a fly in the ointment, a monkey in the wrench, a pain in the ass. He refuses to give up, and he’s hard to kill. But on top of that, this film improves and impresses with every scene, its enlisted several die hards in its own time, proving that it’s a pinnacle in action and crime cinema. It’s my favourite Christmas movie.

I hope you enjoyed this review friends. I’ve about spent my theories on film this year, but fortunately for you, I still have some wisdom and a timely event to share this week. So come back tomorrow and share this article if it meant something to you.