An audience are a group of people who participate in a stage show, performance art, literary reading, musical act, speech or other art form and experience it. When that experience moves from the realm of silent engagement into active involvement, we call that audience participation, and it’s an amazing thing to behold. 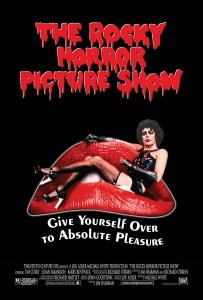 James David “Jim” Sharman is an Australian director and writer. He is renowned throughout Australia for his theatre work and is known internationally for bring the 1973 theatrical hit The Rocky Horror Show to film in the form of The Rocky Horror Picture Show. Less so for the sequel Shock Treatment.

I’m gonna be completely honest with you dear readers. I had not seen this movie before last week. I decided to finally watch it as a way of celebrating the traditions of Halloween and the cultlike nature of the holiday. After all, The Rocky Horror Picture Show got it’s start as a midnight screening sensation, that eventually became synonymous with audience participation. And I would argue is second to none as a social phenom, other than maybe Tommy Wiseaus’s The Room.

If you’re like me and have never seen The Rocky Horror Picture Show, I recommend that you either read up on it’s history first or expect to be super confused as you watch the story unfold. And even then, I think you’ll do yourself a disservice if you don’t look into the scope of this film and it’s cultural effects.

People have been known to lineup hours in advance to watch the movie, many dressed in drag and others dressed up as characters from the story. Once the show starts, the entire audience recites the lines from memory, sing along to the songs, perform displays of affection through song and imitation, and even add dialogue to the story. The ritual of the film is palpable compared to what goes on screen.

I watched this with a group of friends, many had seen it, some had not. And of course, there were opinions about it. Ultimately I learned that it is a very strange story indeed, but completely believable in terms of what it sets out to accomplish, absurdity and acknowledgment of a sexual spectrum, in a time when that was less apparent.

Pros: It features musician Meat Loaf, the songs are fun to sing, and the exploitation element of the film is unique unto itself. When seen with a group it becomes something of an experience.

Cons: When you watch it by yourself, even for a few moments, it becomes rather silly and difficult to accept as a film in it’s own right. The plot is completely absurd.

Points of Interest: This is Tim Curry’s feature film debut. There are literal easter eggs placed throughout the film. In lights, under chairs, in an elevator.

As we enter an age of people who love “Netflix and chillin”, productions like The Rocky Horror Picture Show will likely lose their lustre. I hope that local theatres find a way to continue this lineage, as audience participation is a rather emblematic way to fight against a solitary life. Incidentally, I believe that The Rocky Horror Picture Show serves as a time capsule for sexual liberation in the 1970s, after all, with the 1960s over, something had to maintain that march forward, and thankfully Sharman and friends were there to do it to it.

I have this theory that audience participation is necessary in order for art enthusiasts to truly engage with the art they celebrate, and by having rituals to consider, they not only contribute to the art, but they can share their personal identity with it simultaneously. This is a wonderful thing, and The Rocky Horror Picture Show demonstrates that quality rather candidly.

If you ever get an opportunity, go watch this show with a group of friends. I can almost guarantee you that you’ll leave with a smile on your face. For realz.