The first time I watched This Is Spinal Tap, was when I was in my late teens, it was also around that time that experienced Fubar as well. I can thank my friend Nick for those movies, because he loved to watch documentaries and mockumentaries when we were growing up.

And because I already had a love affair with satire in other shapes and forms, it makes sense that I’d give this weeks movie review a thumbs up. 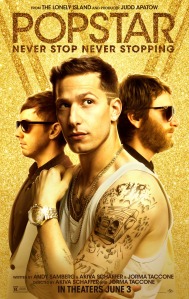 Akiva Schaffer, Jorma Taccone, and Andy Samberg are all members of the popular comedy group The Lonely Island. Known for their involvement with SNL and Samberg in particular for his acting skills, this group generally delivers topical and entertaining satire.

Popstar never deviates from that pattern or presentation, which is a testament to these gents ability. After all, the mockumentary has been done a few times before, some would say done to death. Worse still, musical mockumentaries will always have to compare themselves to This Is Spinal Tap, the quintessential piece of that cinematic format.

Which means that I don’t really need to dig into the story this time around, because we should all know how it goes.

Connor4real (Andy Samberg) is a popstar who is about to release his followup album, but he makes some bad decisions, like investing with an appliance manufacturer that only shares his tracks whenever one of their machines is used. And of course his sophomore album bombs, forcing Connor4real to do everything he can to maintain his solo career, despite major attempts from his DJ Owen (Jorme Taccone), fans, and even talk show hosts to see a reunion tour of his former group Style Boyz. You see, Style Boyz were three friends that included Connor, Owen, and the now missing writer of the group Lawrence (Akiva Schaffer). The group originally broke up when Connor and Lawrence got into a fight over a music award that had been attributed to Connor only.

We watch Connor4real spiral out of control, fighting with everything he has, except for that desire to reunite with this childhood friend. Ultimately the movie leads us to it’s inevitable reconciliation, and all is right in the world.

But in all honesty, I fell asleep in the last 15 minutes… not once, but twice. So if that isn’t an indication of a weak ending, I don’t know what is. And when I actually did force myself through it, I was indifferent.

Pros: The jokes are consistent and the material is solid for the most part, but Samberg really does hold all the star power here, and it’s what makes even the weak moments digestable.

Cons: It isn’t a perfect story by any means, but it’s one you recognize, and I think the movie suffers for it. In quite a few places it feels like you’re watching a sketch instead of a feature length movie.

Points of Interest: In the movie Seal tells the audience he was scarred by wolves, when in real life it’s from an autoimmune disease called lupus, wolves are classified as “canis lupis.” Justin Timberlake cameos as Connors personal chef.

The Lonely Island make comedy music for a viral age, and some might think that this entry in their record is passable for forgettable, I’m inclined to believe that, but who’s to say that this is what we need right now? Never say never, and never stop never stopping.

I’m theoried out for the evening friends. Hit me back tomorrow with something wise and uncharacteristic.