My first real exposure to effective satire came from reading Gulliver’s Travels in high school. In some ways I’m embarrassed to admit this now because I wonder what more I could have learned and accomplished had I been exposed to this type of writing from an earlier age. After all, it is something I value and can appreciate for it’s nuanced and artful nature.

And yet, I’ve made other mistakes by consciously avoiding other authors who are just as capable of striking at these tropes. See exhibit A, for example. 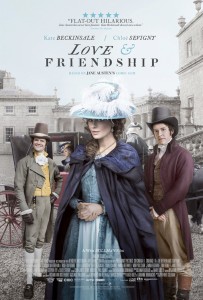 John Whitney “Whit” Stillman is an American writer-director best known for his 1990 film Metropolitan (also his first film), but secondarily for his rather limited number of films released between 1990 and now. To be very clear, Stillman has only directed a total of five films altogether, however each of them have been rather favourable with critics and audiences alike.

Some would argue that The Last Days of Disco was his weakest film, but at 72% on Rotten Tomatoes and lead by Kate Beckinsale and Chloë Sevigny, I suspect that those people don’t know what they’re talking about.

Let’s consider Love & Friendship. A film rather clever in it’s machinations and based on two separate Jane Austen novels.

It tells the story of recently widowed and rather young Lady Susan Vernon (Kate Beckinsale) as she looks for both a match for her daughter Frederica (Morfydd Clark) and also for herself, that she might bolster her own status and fortunes. Lady Susan was staying at the Manwaring estate for some time before she was finally turned out, under assumptions that her and Lord Manwaring (Lochlann O’Mearáin) were having an affair.

So Lady Susan moves into Churchill and stays with her brother-in-law, Charles Vernon (Justin Edwards), and his wife Catherine (Emma Greenwell). Catherine’s brother Reginald DeCourcy (Xavier Samuel) is also there, and eventually Frederica is turned out of boarding school because Susan can’t afford it, so she joins the family too.

This is where we witness Lady Susan bend societal expectations and twist words so that she can always gain the upper hand. When she is unable to convince her daughter to marry the dumb but wealthy Sir James Martin (Tom Bennett), and especially after her flirtations with Reginald turn sour upon his discovery of her relations with Lord Manwaring despite Lady Susan and her best friend Alicia Johnson’s (Chloë Sevigny) efforts to conceal the matter. Instead, Lady Susan convinces Martin to marry her, and conveniently enough Reginald and Frederica marry on their own terms.

The movie hits a high and final important note upon the announcement not two days after the wedding of Martin and Lady Susan. Lady Susan is with child, and Sir James couldn’t be happier. Interestingly enough, Lady Susan had previously invited Lord Manwaring to be a house guest at her new home with Sir James, and Sir James is happy to have a new friend who enjoys hunting all kinds of game.

Pros: The language of the time is handled by Stillman in the best way possible, Kate Beckinsale holds court in whatever scene she is in, and all of the secondary characters fill their roles in expertly timed scenes.

Cons: I fear that the intelligence of the film and all of it’s nuances might be missed by the more casual observer, making it appear boring, when in fact the dialogue and pacing are incredibly important to the overall plot.

Points of Interest: This is the first time the novella Lady Susan has made it to the silver screen, with the name taken from the other referenced Austen book. Sienna Miller was originally cast as the role of Lady Susan but she dropped out.

I’ll be the first to admit that it took me years to warm up to Jane Austen as an author. I was never really interested in the stories because of their focus on social politics and economics of the time, but the truth is that those are just elements of the story, the real value lies in the characterizations, and when a director like Stillman can understand that point, the work of Jane Austen can reach pop culture snobs like moi.

Satire can be a wonderful thing friends, it can take a story entrenched in adultery, manipulation, and betrayal, and turn it into something that you can share with children. Love & Friendship never exposes the gratuitousness so common in our westernized culture, but yet it tells a story so much better. I was a little concerned when I first picked this film up, but thankfully I was wrong about it. And you will be too.

This film is wonderfully done, and exemplifies the power of Jane Austen as a writer, and really showcases her necessity in the halls of writing. Go watch this movie. And then come back tomorrow when I’ll talk some more of love.