People are sick. They have an odd fascination with the end of the world as we know it. EOTWAWKI for short. But the problem with the EOTWAWKI is that it’s been done so many time in film, music, visual art and literature now, that we don’t really react to it as viscerally as we should.

I blame it on summer blockbusters, but that’s just my theory. Now, where it gets interesting is when we start to explore movies that deal with the subtleties of what could happen both during and post. Today’s review is about the later. 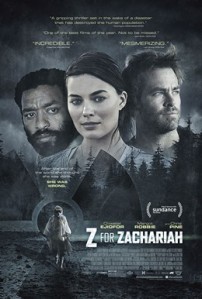 Craig Zobel is an American director, who got his start as a co-founder of the animated web series Homestar Runner. If you don’t know anything about Homestar Runner, you need to go check it out right now. Stop reading this review and watch some episodes of the show. Start with the back catalogue first, especially the Strong Bad Emails. Done? Good.

How weird is it that the guy who made that show is making serious movies now? I find it very unsettling, especially considering how much I enjoyed Z for Zachariah. And the fact that Zobel also directed Compliance, a 2012 movie about the strip search prank call scam that happened in the United States in the early 2000s.

Z for Zachariah is the story of a woman named Ann (Margot Robbie) who has survived nuclear war. She is living on her family farm in the middle of a valley – which has somehow been sheltered from the fallout, with the exception of water that comes over the falls from the mountains. She has a good routine which involves feeding both her and her dog, tending the land, and enjoying music and books.

One day a stranger (Chiwetel Ejiofor) enters the valley in a radiation suit. He was working in a government bunker and avoided the initial attacks, but has definitely been effected by the radiation and loneliness from searching for survivors. When he stumbles upon Ann’s valley, he immediately goes to the falls to clean himself, but Ann jumps out and warns him of the radiation. The man gets sick, and she cares for him until he is well, asking God that he might live. We learn his name is John Loomis, and both Ann and John begin to trust one another.

At one point John suggests that they build a waterwheel to divert the water and generate power, however because it would require a break down of the community church that Ann’s father built, she is reluctant to do so, and John drops the subject. Their chemistry and sexual tension increases over time as well, and just as the relationship is about to blossom another stranger shows up. His name is Caleb (Chris Pine) and he has a different perspective on how events should play out than John.

This is where the story gets interesting, a love triangle forms between the three characters, with conflict between John wanting Ann for himself, wanting her happiness, distrust for Caleb and Ann caught in the middle. We get to witness the full range of emotions that each character has about the other two, without a ton of dialogue. In some ways, it simplifies the plot, but in others it sets the story up for a rather poignant ending, which I won’t ruin because I think it’s worth saving.

Pros: It is a very thoughtful story, albeit somewhat slow in it’s pacing. But with the decision made, it allows the viewer the opportunity to really mull over what has been seen and wonder whether characters are committing deeds out of love or self-love.

Cons: The movie struggles with knowing when to speed up and really make a choice about it’s message. We are left to fill in a few of the gaps ourselves.

Points of Interest: Based upon a book by Robert C. O’Brien, the love triangle is not in the original story, which only featured Ann and John.

This is a nuanced and interesting take on the post-apocalyptic film. Chiwetel Ejiofor gaves a nuanced performance and makes you question his character though he is set up as the sympathetic male lead from the start. Margot Robbie of course delivers with a range of emotions and her obvious naïveté as a young woman who doesn’t know what to do. She pulls it off well. And of course, Chris Pine is always charming and interesting with his devil-may-care attitude. While Z for Zachariah s not quite the same thing as the book, Zobel manages to construct an interesting story all the same.

This post-apocalyptic movie is definitely a slow go, but it does ask the question – what if you had all the time in the world? What would you do? And then what would you do if all of a sudden there was a possibility that you had to suffer as a third wheel in an infinite loop? Zobel manages to expose these shifts in power and opportunity, never revealing what each characters true motivations are. I doubt you’ll catch many Z’s after watching this one, but that’s just a theory.