Mashups can be fun, if you take the right mix of levity and appreciation for each facet, then you can make it work in your favour. Whether it is a song, a movie, a comic book, a video game, it doesn’t matter, as long you know your source material and come at it with fun, research, and actual passion, it’ll get through.

But when you dial it in, just for the property rights, then your mashup will suck. Period. 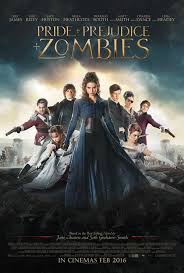 Burr Steers is an American screenwriter, director, and sometimes actor. He has been involved in a few Tarantino movies as an actor, and has directed film like Igby Goes Down, 17 Again, and Charlie St. Cloud. Which is why I find it interesting that he decided to direct Pride & Prejudice & Zombies, henceforth known as PPZ in the rest of my review.

And I just might have an addiction to silly movie premises. I bought Abraham Lincoln: Vampire Hunter, Wolfcop, and now PPZ mostly because I liked the idea of a good mashup, but the reality is that often these horror movie crossovers don’t pull the trigger, and leave you with powder in hand, so-to-speak.

Which is where PPZ ultimately ends up, and in the final third of the movie too.

Now, I have to decide if it is even worthwhile to explain the premise of the movie to you, given that it’s a mashup of an established and well known book with some zombie thrills.

So I’ve decided to sum it up rather easily for you, zombies are injected throughout the story in small portions, but it is not until Elizabeth spends some private time with Wickham, and before the reveal that he used Darcy’s family money and tried to squander it via eloping with Darcy’s sister that we see the story twist. But this is because this is a parody of Pride and Prejudice, and Wickham is also secretly a zombie himself, wanting to have treaty with the humans and set up a high position for himself and his fellow zombies who live off of animal parts.

Inevitably the movie ends up with Wickham on the side of bad, capturing Lydia, and Darcy coming in to the save the day. Then Elizabeth confesses her love for Darcy and there is a double wedding. Neat and tidy, and in line with the original.

The truth is that the story feels muddy, and the mythology is interesting but also confused and in some ways forced upon us. There will be gaps without zombies, and then the zombies come back in but with tremendous effort on the part of the characters to justify the zombies place in their world.

Pros: Despite or because of the premise, the movie is full of cheese and fun, poking at the action genre and gender roles, both within the source material and in action films. And if you’re a horror fan it’ll make the original material less boring for you.

Cons: It never feels like it’s confident in what it is trying to sell us. The movie starts off interestingly enough, but the action grows stale and the twist is not alluring enough.

Points of Interest: Natalie Portman was originally cast as Elizabeth Bennet but dropped out due to scheduling conflicts. All of the Bennet sisters did their own stunts for the movie.

The opening sequence promises us that the Georgian period we know so well is in fact one of nightmares. With the rich learning Eastern disciplines in combat so that they might fight off the zombie terror. But the problem is that we never get to see them sweat or earn their abilities, and so the combat immediately feels contrived. That and the already mentioned mythology make it a fun popcorn movie, but not much else.

PPZ is not the worst mashup I have ever come across, but it’s not the best either. It middles about and hopes to get away with it, on the premise that teenagers and fans of the ridiculous will take it in. You have to decide yourself it this movie was made out of pride or prejudice, but I’m pretty confident that it wasn’t made for zombies. But that’s just a theory.