I’m happy to be hardcore, when the occasion calls for it. If I’m being perfectly honest, I don’t think it calls for it that often though.

It’s difficult to get into that state of mind when you realize that like anything in life, you have to make a commitment and experience all the nuances of the thing. And if you aren’t ready for that level of absorption, you’ll fake it for a long time until you make it through.

Which sounds incredibly painful to me. Better to do what you love and makes changes along the way. 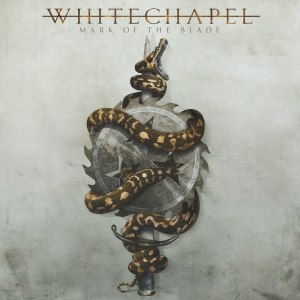 Whitechapel are an American deathcore band, and I don’t think you’d find too many dissenters against that assessment. They are comprised of vocalist Phil Bozeman, with Ben Savage on lead guitar, Alex Wade and Zach Householder on backing guitars, Gabe Crisp on bass, and Ben Harclerode on drums. They’ve taken their name from the famous Whitechapel district of East London. You know, where Jack the Ripper murdered a bunch of people? Yeah that Whitechapel.

Their influences come mostly from Phil Bozeman and Ben Savages mutual love of death metal, but with a decent influence in black metal and hardcore. Think of bands like Cannibal Corpse, Slipknot, Pantera, Slayer, Vader, Carcass, Amon Amarth, and you’ll start to see the picture.

I’ll admit, as I always do when it comes to new territory, that I’ve never listened to Whitechapel before nor do I know much about the deathcore sub-genre of extreme metal. Which is apparently a fusion of death metal, metalcore, and hardcore punk. The real lesson here is that it shows me how little I know about metal, but that’s a cross I’ll have to bare in this review.

Mark of the Blade is Whitechapel’s sixth album to-date. And apparently it features their most clean vocals too! Which I find absolutely fascinating, because normally this kind of music is difficult for me to separate out lyrics with. Thankfully the liner notes came with lyrics because it helped me to digest the music that much quicker and appreciate what had gotten myself into.

And that led me into a bigger rabbit hole – The lyrics are dark and the message is pretty much to the point, go fuck yourself if you’re pretending to be something you’re not. That and pain is real. It’s something we will all experience thoroughly before we die. Alone.

Maybe that’s a harsh and short statement to make, and the content isn’t entirely without hope. Whitechapel asks us to find solace in brotherhood which comes from a million scars, both self induced and acquired through violence and subjection. Yeah that was mean of me.

To be honest, I think the tempo of the album has a lot to do with the unevenness of my experience too. The clean vocals make sense on Bring Me Home because he is singing about his dead father, and Decennium is an epic closing track, so that is great too. I enjoyed the instrumental middle song called Brotherhood too. Maybe that’s the problem, though, when I just sit with Whitechapel, I get lost in it and it doesn’t do it for me, but those irregularities for me make the band interesting and worth more visits down the line.

Did I fall in love at Whitechapel? No, but I think I just made a commitment.

Whitechapel are making music that they care about, tweaking it as they go. I flirted with something new and gained some more perspective on the dedication and skill required to embrace the beast that is extreme metal. But fortunately enough, I have a bit of experience with music and lyrics, so it was like I was thrown to the lions.

As a friend reminded me the other day, Whitechapel might not be producing Grammy worthy music, but that shouldn’t be how we view their oeuvre. Within their musical realm, they’re doing great work, making their mark. And that’s all of the theories I’ve got for today.