We all have a point in our life when we do terrible things, and everyone around us, including ourselves suffers, but I truly believe that out of tragedy greatness can be achieved… And that’s what this week’s music review is all about. 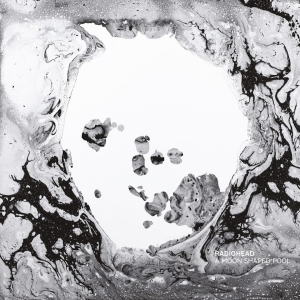 This is the 9th studio album by Radiohead. Radiohead are an English experimental rock and electronica band that formed up in 1985, which as a personal anecdote, is the year I was born. Made up of Thom Yorke (mostly lead vocals), Jonny Greenwood (mostly lead guitarist), Ed O’Brien (guitar), Colin Greenwood (bass), and Phil Selway (drums), they have all worked together since the band’s formation.

Two more fun facts before we move into the review. First, their breakout single, Creep, was released in 1992, the year my youngest brother was born which demonstrates the 7 year gap between their formation and “breakout” succes. Second, Radiohead has used the same visual artist (Stanley Donwood) to design their album art, Thom Yorke’s solo ablums, and Yorke’s part-time gig, Atoms for Peace.

A Moon Shaped Pool has a really high score on Metacritic and has received high praise in all of the album reviews I’ve read thus far. As a long-time fan of the band and despite really really enjoying this new album, I am at something of a loss though as I don’t own nor have I really listened to their previous record, The King of Limbs. I mention this because at it’s time of release I had heard bad things about TKOL and couldn’t be bothered with it.

And now I read statements about how much of a hot mess King of Limbs was, and while I personally see why this is an excellent Radiohead album, I can’t make that comparison.

But fuck that, it shouldn’t even matter. If we all operated in a vacuum this review would be incredibly different, so you got my backstory, my perspective and I suspect the review is all the richer for it.

I remember when I was a bright young university student. Full of angst, rebellion, and a thirst for melancholy. It only made sense that one of my professors thought I was a huge fan of Radiohead, a joke not lost on me at this stage of my life.

But Radiohead have traded in their mopey sad songs for dreams and the eternal – This is best showcased on the tracks Daydreaming and Decks Dark which are early enough in the record to solidify this new position.

Opener Burn The Witch is typical of Radiohead and well constructed like a much needed timepiece for our generations arm. Especially since it’s an older song finally realized in studio format. The story about lynch mobs can be applied to any number of current pop culture and political hysteria too.

And in case you were wondering, the electronics that made Radiohead synonymous with alienation and genius, and consequently the root of numerous imitations, is alive and well. If you listen to Identikit, The Numbers or Tinker Tailor Soldier Sailor […] in isolation, you’ll get  that old familar feeling.

On Present Tense, I’m reminded of the entire vibe of the amazingly good album In Rainbows, which is cool because that album came out in 2007 and Radiohead have been honing this song since that time period. But the best is definitely last and will pay service to true fans. True Love Waits has been part of their archives since the mid 1990s.

I can’t say enough good things about this album, because the band fused two things. They took what we love about Radiohead and simultaneously helped themselves push forward, which is the reason why they keep making records. Would I say this is their best album ever? I don’t know, but would I say it’s one of the best albums of this year or even of this decade. Yeah, yeah I would.

Sometimes you have to hit your lowest low to realized what the hell you were doing there in the first place and why you care about what you care about, The King of Limbs was definitely a low point for Radiohead, A Moon Shaped Pool is a demonstration of a return to their power to reform. And yes I am using multiple definitions there. I’m theoried out friends, I’ll see you tomorrow with a movie review.