Ever watched a movie JUST for the soundtrack? No? Well me neither, but there are tons of posts on the internet which claim that exact practice is worthwhile, and I will strongly disagree.

However, I do believe that a great soundtrack can help define and reinforce the ideas of a film. And the reason for this is that it usually comes down to the storytelling ability of the musician(s) behind the scenes.

This week we review an album that I could very easily see in a soundtrack in the near future. 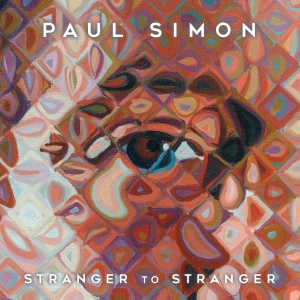 Paul Simon is an American musician, singer, songwriter and sometimes actor. He got his start as part of the duo known as Simon & Garfunkel, which performed together for six years in the 1960’s before splitting up at the height of their success – Simon is known to have been the predominant writer of Simon & Garfunkel and should be especially proud of Mrs. Robinson, The Sound of Silence, and Bridge over Troubled Water, which were all no.1 singles in their time.

He has also successfully managed a solo career, including 12 Grammy awards, a Lifetime Achievement award, induction into the Rock and Roll Hall of Fame, and various other accolades.

Stranger to Stranger is Simon’s 13th studio outing and what I would consider a fantastic representation of him as an artist, given that I haven’t really followed his work. At. All.

Yes, my personal experiences with Paul Simon have mostly revolved around movie soundtracks that sampled his work in Simon & Garfunkel, so that means I’ve enjoyed the tranquillizer scene in Old School all the more thanks to The Sound of Silence, was bemused by Dustin Hoffman in The Graduate while Mrs. Robinson played and played with him, and even Bridge Over Troubled Water has a movie title named after it, it is the quintessential S&G song, after all.

But I think that recognizing a well made and ambitious album has less to do with knowing the artist’s catalogue of work and more to do with understanding the broader soundscape that is music.

Songs range from the hilarious opener The Werewolf, which is about a midwest murder in suburbia, to the lightly spread Wristband (with hints of darkness), to the very direct phone problems of In A Parade.

Though one track that manages to stick out like a sore thumb for me is Cool Papa Bell.

It’s incredibly absurd and paints a portrait of a man who has lost touch with reality, and it’s full of swear words. Which is kind of hard to imagine if you think about Simon’s vocals for too long. He lays it on in his typical indie folk style, but the lyrics combined with the world music tone create a very interesting and satirical final product.

And he takes life experiences as well to produce these songs, which tells me Paul Simon isn’t quite done experimenting like The Riverbank, which is the result of visiting vets at a Boston hospital.

And then we have the closing track, Insomniac’s Lullaby. Which is my personal favourite. It’s silly, sincere, sweet, and surprisingly sinister. And yes, I apologize for all of the alliteration, but Paul Simon says so, so I shall share. Now I’m done.

Should you listen to this record? Hell yes, you should. Paul Simon may be in his 70s but just as relevant today as he was 50 years ago and that shouldn’t make him a stranger to anyone.

Fortunately for Paul Simon, his glory days are not behind him. He is still creating music that can entertain and tell a wonderful story. Which is why it should surprise no one at this point that Mike Nichols knew what he was doing when he grabbed Simon & Garfunkel hot off the press and inserted it into his movie. Hopefully there is an indie more or 3 out there that will sample from this album and further cement it’s value in pop culture. And that’s all the theories I’ve got for today, see you tomorrow with a review that should be in a zoo.