For someone who claims to not want to watch horror movies, I seem to be reviewing a number of them already this year.

I would complain. but I’ve been rather fortunate to have watched really excellent movies, ones that walk the fine line between fear and folly. Which only adds to my theory that satire is the best way to communicate issues we’d rather ignore.

And so here we are, at this week’s Theatrical Tuesday with a horror movie that just might warm your stone cold heart. 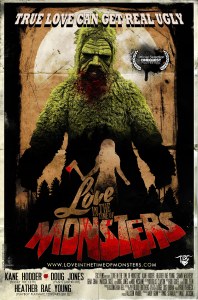 Matt Jackson is something of a unicorn as it relates to the movie industry. I scoured the internet and found very little in the way of information about him other than learning he has been involved in entertainment for over a decade now, getting his start in Arizona and developing his skills over a myriad of independent productions. He has directed the action/adventure/comedy Background(ed) and the horror/comedy Love In The Time of Monsters.

He frequently collaborates with producer Andy Gunn, and I hope they are either working on a sequel or something equivalent soon. Did I just give away my thoughts on the movie?

Love In The Time Of Monsters is not, despite the clever title, a parody of Love In the Time Of Cholera, which I am thankful for because that movie was super boring. I know, I know, it’s beautifully shot, but so what? If something is polished and turdlike, that doesn’t make it worthwhile, its just shiny shit.

So what is LITTOFM then, you ask?

It’s a story about two sisters who have lost their father to a family vacation accident many years previous and how they have grown up as a result of said accident. One is a hopeless romantic about to get married, and the other a cynic with no interest in long-term attachment.

We follow them as they take a vacation to Uncle Slavko’s All-American Lodge, where Carla (Marissa Skell) hopes to surprise fiance Johnny who is working at the resort as a Bigfoot impersonator (one of many). Marla (Gena Shaw) wants to have fun and hopefully have a casual encounter or two, though she has no luck with this. While this is happening the entire fleet of Bigfoot impersonators (save one) are exposed to a chemical waste that turns them into mindless zombielike creatures, and some/one of them even gain powers akin to Gremlins 2, which gave me a particular moment of glee.

What is amazing about this movie is that somehow through all of the absurdity, the tongue-in-check horror movie moments, the b-movie practical effects, and the expected Bigfoot cameo, we easily relate to each member in the sizeable cast of characters. The backdrop mainly serves as a plot device, but it truly is a story of love in the time of monsters. And if you’re caught of guard, love will appear.

Pros: There are a number of horror actors who represent in the movie and the cliches are played to a T. I especially enjoyed the dynamic between Carla and Marla. Also Dr. Abraham Lincoln was comedy gold.

Cons: My major complaint is the introduction to the story – I kept expecting there to be more of a tie-in to the father’s death and the one scene about it felt somewhat forced. This is worrisome because a casual movie viewer might get turned off before the story gets interesting.

Points of Interest: The one gratuitous nudity/death scene was delivered by Heather Rae Young – she happens to be a former Playboy Playmate.

I keep thinking back on the film as I write this review and I can’t help but smile when I think about all of the goofy special effects and the use of CGI in a disarming and fun way. I always wonder if a horror comedy is going to go off the rails and make me want to swear them off altogether, but Love In The Time of Monsters has cemented that love in my heart to keep back at least a dozen bad examples of the genre.

Jackson has done an excellent job adding to the oeuvre of horror comedy and I sincerely hope that another of these flicks gets made, even if it’s on another horror topic. With that said, I highly recommend you take some time out of your day and watch Love In The Time Of Monsters, I have a theory you just might fall in love with it.