Ever heard the expression awkward turtle dear readers? It’s a hand gesture used to either break the tension of an awkward situation or potentially amplify it.

It’s been around since about 2007, so it’s already starting to lose significance as slang, but that doesn’t mean people don’t try to use it when possible.

Today’s movie review features an idea a little dated but which hopes to use it’s awkward turtle to diffuse the room. Let’s find out if it can. 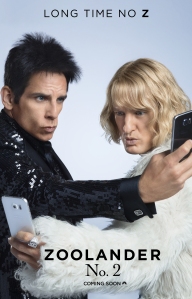 Benjamin Edward Meara Stiller, commonly known as Ben Stiller, is an American actor, comedian, and filmmaker. He is the son of comedian duo Jerry Stiller and Anne Meara.

Ben Stiller has been involved in over 50 movies with 7 directing credits to his name – Elvis Stories, Reality Bites, The Cable Guy, Zoolander, Tropic Thunder, The Secret Life of Walter Mitty, and Zoolander 2 among them, which had had a part in each as well.

Some of his best roles have included While We’re Young, Tropic Thunder, Dodgeball – A True Underdog Story, The Royal Tenenbaums, Meet the Parents, There’s Something About Mary, and Zoolander.

Zoolander 2 is definitely a passion project, because it follows the format of original by fifteen years and is a successful continuation, but not necessarily in a good way – The story is full of cameos and features the same sort of jokes, but nothing particularly interesting.

The plot sees Interpol follow the deaths of several prominent celebrities all with selfie photos taken at the time of their deaths. Agent Valentina (Penelope Cruz) is convinced this pattern is associated with Blue Steel, and we are re-introduced to Derek Zoolander (Ben Stiller).

We learn that shortly after the end of the first movie (15 years ago) Zoolander’s school killed his wife, scarred his frenemy Hansel (Owen Wilson), and resulted in his son being taken away from his resulting ineptitude. Valentina recruits the two former fashion icons to help with the investigation while both have been summoned by the new fashion designer guru Alexanya Atoz (Kristen Wiig) to attend a show.

Somehow they manage to fit in even more cameos too. Including Katy Perry, Neil deGrasse Tyson, Skrillex, Billy Zane, and a number of real fashion icons. Will Ferrell easily steals the show once again, but it almost feels a bit late in the game when he finally does get screen time.

Pros: It’s awesome to see the Zoolander and Hansel characters come back at each other again, and the Justin Bieber scene was amazing. And obviously Ferrell as Mugatu cannot be beat.

Cons: The plot feels like a rehashing of the first movie, with minor tweaks and some James Bond themed elements thrown in for fun. In other words a poor man’s Austin Powers. The cameos strain pretty quickly too.

Points of Interest: The mythology developed around ‘the one’ about Adam, Eve, and Steve is a parody of anti-gay marriage campaigners who would chant “It’s Adam and Eve, not Adam and Steve!” Jonah Hill was originally part of the cast, but later bowed out.

One of the most interesting moments of the film is the Benedict Cumberbatch cameo for sure, but only because of the amount of controversy it has created.

I personally think that head writer Justin Theroux is correct in his statement that the writing was a satire over the debate of transgender rights and the difficulty which both sides have in discussing the topic, but regardless, that the film doesn’t tackle the overall plot properly to begin with doesn’t help that scene at all. It nullifies it in fact.

The awkward turtle that is Zoolander 2, isn’t going to being turned over any time soon. Hansel is not so hot right now – and while that reptile is cute and funny at times, we mostly feel bad for the creature, hoping that we can turn it upright and move on to the next vine or snapchat in our smart phone. Maybe a selfie will help to forget about that click-bait.