To be brief, I personally believe the most awesome power of music is that it can address specific emotions. And particular kinds of music have the ability to draw up those feelings in ways that no other kinds of sound can. Soul music easily comes to mind in this regard.

As a white man, with a mixed ethnicity of european countries, I have little in the way of understanding the totality of soul music. As its origins are tied into the lives, successes, challenges and dreams of black people, especially from the United States.

But I can appreciate the quality of the music and the basic human emotions that those artists put forth. Fortunately this week’s review comes from an artist who can properly address the genre. 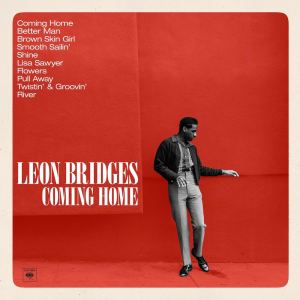 Todd Michael Bridges is better known by his stage name, Leon Bridges. He released his first studio album Coming Home under Columbia in the summer of 2015 after playing in local clubs in and around Fort Worth in the USA. A chance meeting with White Denim’s Austin Jenkins is what pulled things into focus though.

Bridges’ music is 1950’s and 60’s inspired soul, with elements of gospel, R&B and blues thrown in for good measure.

He is only 26 years young and has experienced a meteoric rise from washing dishes and playing at open mics, to releasing a couple of singles to Soundcloud, Spotify and other streaming sources in 2014/early 2015, to working his first album to be released in time for summer.

This was almost a year ago.

And this might also be obvious if you’ve heard the title track Coming Home, which was one of the singles from the album, but this record was put together with vintage equipment and using local musicians that White Denim collaborate with. If you need to reference the rich back catalogue of soul music to get a feel for his sound, Otis Redding and especially Sam Cooke come to mind. And Bridges purposefully dresses the part which means if you snuck a vinyl copy of this album in with some records from that era, it wouldn’t look out of place.

Yeah, yea, timotheories that is all well and good, but what does the album sound like? And is it any good?

If you enjoy a good combination of guitar, drums, piano, saxaphone, female back up vocals (and who doesn’t), along with smooth sounding lyrics set to ballads, and relaxed storytelling, then Coming Home will feel just like home.

I decided to buy this album on a whim. I was inspired by the cover art and I’m a sucker for a good crooner (read: yesterday’s post about marketing), which is the vibe I got, so if that’s an indication of the quality of the record, great, but for you non-believers, let’s continue on.

One of the perks of writing a review on an album that has been out for a little while is that I get to lend my spin to the review process without the urgency element and draw from the wealth of information already available. Drawing a parallel between myself and Bridges, I have choosen to become comfortable with a set of creative rules (some might say limitations, and they’d be wrong) so that I can best exemplify what it is I want to put out there in giving you useful feedback on music. Which is an important point to make about Bridges – comfortability.

Yes, Leon Bridges wears “vintage” clothes and echoes all the common pieces of the genre, but dammit if he isn’t authentically expressing his love of music and soul in particular. He is comfortable in and snuggles up close to the genre

Which is why I gave it an eight. This is an incredible piece of soul music, from a technical standpoint. I can’t fully commit though, because Bridges doesn’t either.

You see, dear readers, Bridges isn’t of the time period this music beckons from and he doesn’t have the same urgency and exhaustive energy behind the albums. At least that’s the impression I get. I suspect with time he will improve incredibly.

For now, I recommend the listen to the album we do have and you should definitely check out these tracks to get you started 1 2 3 4.

In short, yes Leon Bridges is a talented musician and yes he should keep singing soul music because he is damn good at it, but whether he has fully captured the essence of the emotional genre remains to be seen. My hope and belief is that he will improve with age, and so I’ll add this album to my collection.