You know that saying the apple doesn’t fall too far from the tree? I was never a big fan of it myself, because when I was growing up I wanted to be my own man, with my own ideas; I didn’t want to bogged down by tradition and duplication.

The problem with this attitude though is that not matter how hard we try, we don’t live in a vaccuum and we inherit traits from our biological parents, and depending how we grow up, also from those who raise us up.

So there isn’t necessarily anything wrong with knowing the blueprint. You have to know what you are working with so you can improve upon it.

Which leads us into this week’s film review. 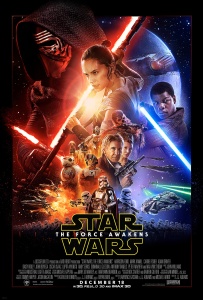 Jeffrey Jacob Abrams, better known as J. J. Abrams, is an American director, producer, screenwriter, and composer. He is known for his work on M.I. 3, the Star Trek reboot, and sequel Star Trek Int Darkness, as well as Super 8.

Abrams is well now known for his science fiction and adventure films, and he has a good understanding of drama as well. He is the co-creator of the television series Lost.

I remember when it was first announced he would be at the helm of this movie, people were really nervous that he wouldn’t be able to address both Star Wars and Star Trek. That he would further ruin the Star Wars franchise. But obviously he didn’t. Let’s take a look see at the plot.

Taken from Wikipedia and edited,

Approximately 30 years after the destruction of the second Death Star, Luke Skywalker (Mark Hamill), the last Jedi, has disappeared. The First Order has risen from the fallen Galactic Empire and seeks to eliminate Luke and the New Republic. The Resistance, backed by the Republic and led by Luke’s twin sister, General Leia Organa (Carrie Fisher), opposes them while searching for Luke to enlist his aid.

Resistance pilot Poe Dameron (Oscar Isaac) meets village elder Lor San Tekka (Max von Sydow) on the planet Jakku to obtain a map to Luke’s location. Stormtroopers commanded by Kylo Ren (Adam Driver) destroy the village and capture Poe. Poe’s droid BB-8 escapes with the map, and encounters the scavenger Rey (Daisy Ridley) near a junkyard settlement. Ren tortures Poe using the Force, and learns of BB-8. Stormtrooper FN-2187 (John Boyega), unable to bring himself to kill for the First Order, frees Poe, and they escape in a stolen TIE fighter; Poe dubs FN-2187 “Finn”. They crash on Jakku, Finn appearing to be the only survivor. He encounters Rey and BB-8, but the First Order tracks them and launches an airstrike. Finn, Rey, and BB-8 flee the planet in a stolen, rundown ship, the Millennium Falcon.

The Falcon breaks down, and is captured by a larger ship piloted by Han Solo (Harrison Ford) and Chewbacca (Peter Mayhew), who reclaim their former vessel. Gangs seeking to settle debts with Han board and attack, but the five escape in the Falcon. The gangs inform the First Order of Han’s involvement. At the First Order’s Starkiller Base, a planet converted to a superweapon that uses the energy of stars to destroy star systems, Supreme Leader Snoke (Andy Serkis) orders General Hux (Domhnall Gleeson) to use the weapon for the first time. Snoke questions Ren about the involvement of his father, Han Solo; Ren says Han means nothing to him.

The Falcon crew view BB-8’s map and determine it is incomplete. Han explains Luke tried to rebuild the Jedi Order but exiled himself after an apprentice turned to the dark side and destroyed what Luke had built. They travel to the planet Takodana and meet with cantina owner Maz Kanata (Lupita Nyong’o), who can help BB-8 reach the Resistance, but Finn wants to flee on his own. Rey is drawn to a vault and finds the lightsaber that belonged to Luke and his father Anakin Skywalker before him. She experiences disturbing visions and flees into the woods. Maz gives Finn the lightsaber for safekeeping.

Starkiller Base destroys the Republic capital and fleet. The First Order attacks Takodana in search of BB-8. Han, Chewbacca, and Finn are saved by Resistance X-wing fighters led by Poe, who survived the TIE-fighter crash. Leia arrives at Takodana with C-3PO (Anthony Daniels) and reunites with Han and Chewbacca. However, Ren captures Rey and takes her to Starkiller Base. He interrogates her about the map, but she resists his mind-reading. Discovering she, too, can use the Force, she escapes her cell with a Jedi mind trick…

What, I’m stopping there? Come on folks, you should know better by this point. I’m not going to finish the movie for you. I’d rather you watch it yourselves – but I will do what I can to assure you to do so.

I will start by saying this, yes it does look and feel a lot like the first film in certain ways (A New Hope), and it takes elements from Episodes V and VI, but I think that it was important for Abrams and Disney to do that, and for George Lucas to let go of input after initial consultation. George Lucas modelled the initial trilogy around Joseph Campbell’s The Hero With A Thousand Faces, and like that story, the themes of a successful hero’s journey are always the same.

By acknowledging the success of the original trilogy, the themes Campbell’s book, and reinvigorating a new generation with another hero’s journey (this time a heroine), we get to enjoy a fun and empowering story.

Pros: It is fast-paced, features new faces and old, and we care about the entire universe. The Force Awakens is incredibly faithful to the original movies while charting some new territory at the same time, injecting fun back into the franchise. FUN George Lucas.

Cons: Without giving anything away, I still struggle with the climax point of the movie, if only because I think that while it was necessary, the emotional pull was on us, and not on the characters involved. And that’s all I will say about that. Second, the political story behind the First Order is rather dim and will hopefully be addressed proper in Episode VIII.

Points of Interest: Mark Hamill found out about the new trilogy over lunch with George Lucas, and Lucas rather nonchalantly told him he could be in or out, and they would write him out if need be. Hamill nonchalantly expressed interest, though he was super excited. Daisy Ridley and John Boyega were not allowed to tell anyone they had been cast until a few months in, though Boyega did tell a cab driver.

You can tell immediately how much respect everyone involved has for the original trilogy and their concerns in protecting the framework and emotion in those three films. But hands down the breakout performances by the new characters are my favourite parts of the story. Daisy Ridley is fantastic as Rey and Adam Driver is moody and chaotic as Kylo Ren. Not to mention the relationship between John Boyega and Harrison Ford’s characters.

I wrote about this once already this week (read: Weezer, white album review), but returning to form is not necessarily a bad thing, especially if that form is what gave you purpose and a voice to begin with. I will also tell you that I am not going to give this movie a 10 for two reasons. First, because I realize it is the first film in an arc and it’s got two more films to prove itself. And second, because it took 30 years for Star Wars to return to form.

Having said that, I personally enjoy the prequel trilogy. Not all of it, but I definitely like the buildup to Episode III and can even tolerate Episode II. I’ve seriously given thought to the machete order as a way to introduce future progeny to this franchise.

Regardless, The Force Awakens is both the movie we want and the movie we deserve. Please go watch it if you haven’t. Buy the digital HD, the blu-ray or the DVD. Support this movie so the next few are properly supported.

But what do you think? Do you like the new Star Wars? Do you hate it? Leave some comments, and better yet subscribe to the blog! I’ll see you tomorrow with wisdom on social media.