Christmas movies are an interesting topic, because what constitutes a “Christmas” movie can vary by opinion. But the general idea is that a movie has to open no later than November (American Thanksgiving) and the story has to take place inside of the holiday season.

Whether the story is about Christmas itself is where the debate opens up, but fortunately for us, this week’s review is safely within that criteria. 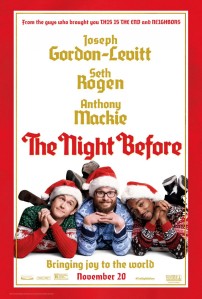 Jonathan A. Levine is an American film director and screenwriter. He has directed 6 feature films to date, and the one you’re most likely to have seen is 50/50, which also happens to star Joseph Gordon-Levitt and Seth Rogen. It’s a great movie about the trials of cancer both from the perspective of the friend with cancer and the friend without.

And that movie wouldn’t exist if The Wackness hadn’t done so well at the Sundance, LA and Melbourne film festivals.

So what is The Night Before about?

Taken from IMDB and edited,

Ethan Miller (Joseph Gordon-Levitt) lost his parents in a car accident on Christmas eve 2001. His best friends Isaac Greenberg (Seth Rogen) and Chris Roberts (Anthony Mackie) start a tradition to hang out every Christmas Eve. In 2008, while at a bar, they learn about the craziest Christmas party ever – The Nutcracker Ball. Each year, the guys try to find the party, but never succeed.

In 2015, Chris is now a famous football player that secretly uses steroids while Isaac is married to Betsy (Jillian Bell) and is expecting their first baby. Ethan is a struggling musician that has recently broken up with his girlfriend Diana (Lizzy Caplan) and works at a hotel. While tending the coats, Ethan finds something in one of the pockets – three tickets to The Nutcracker Ball. He calls the number on the tickets and learns that the location will be announced at 10:00 PM.

Isaac is at a party hosted by Betsy’s sister Cindy (Helene Yorke). Ethan, already a little drunk, shows up before Chris arrives. Isaac and Chris want their yearly tradition to end now, but don’t think Ethan is quite ready. Before heading out, Betsy gives Isaac a box full of every drug known to man.

They take a Red Bull limo (Chris sponsors it) to Rockefeller centre where Ethan reveals the tickets. They kick off the night by going to FAO Schwartz and dancing on the piano like Tom Hanks in “Big” to Kanye West’s “Runaway”. Chris calls teammate Tommy Owens (Aaron Hill), who is attending The Nutcracker Ball and asks for weed. The guys call their dealer Mr. Green (Michael Shannon) who shares some weed with Chris and tells him to go to a party he’s throwing later, and to tell Isaac that he’ll see him later.

Next the guys sing “Christmas in Hollis” at a karaoke bar while wearing three festive sweaters that Ethan wants them to wear. They are met by Diana and friend Sarah (Mindy Kaling). Ethan and Diana make small talk while Isaac is already tripping. He runs into the bathroom to do coke and balance himself out, and then makes a video expressing fears over becoming a dad. He goes back to talk to Sarah, gets them both drinks but his nose starts bleeding and a drop falls into Sarah’s drink, which she drinks unilt Isaac’s nose bleeds harder and he admits he did coke. Outside the bar, Chris talks to a fan named Rebecca (Ilana Glazer), who admittedly hates Christmas. The two have sex in the bathroom.

Afterwards, Ethan call for the party address. Chris then realizes Rebecca stole his weed during sex. They contact Mr. Green again and wait at Chris’s mother’s house. Isaac gets the weed when Mr. Green shows up. He shares weed with Isaac and gives him a glimpse of the future where his daughter is a stripper.

When Isaac goes back inside the house, his phone’s ringtone goes off, waking up Mrs. Roberts (Lorraine Toussant). She feeds the guys while Isaac trips out and looks at his phone to find a dick pic from a guy named James. Confused, Isaac responds and is propositioned by James. Realizing he has Sarah’s phone, Isaac freaks out that Sarah while show Diana his video, which will get to Betsy. Meanwhile, Chris and Mrs. Roberts talk about Ethan and Diana, Mrs. Roberts suggest Ethan take the opportunity on Christmas to make it up to her.

This festive comedy is fun and entertaining, but a little bit mediocre.

Pros: The story is best when the nuances of the three friendships are tested and enjoyed, but the real comedy comes from Seth Rogen and Michael Shannon.

Cons: The scenes change constantly without ever really feeling necessary, and the plot can feel gimmicky, especially at the very end.

Points of Interest: Jonathan Levine admitted that the comedy elements of the story were mostly improvised but the dramatic ones were planned, and served as an outline. All three main actors have portrayed super-heroes.

The movie has its moments, particularly the vision into the past where the two friends become Ethan’s symbolic parents, and joke about James Franco and Seth Rogen’s character is very on point. Where I struggle with it, is that the movie never fully committed to Ethan as the protagonist and the plot had too many threads.

I will say this though, the movie is very entertaining for a Christmas themed one, and I can definitely picture it coming out occasionally for those times when you’ve got the Christmas jones.

The Night Before is definitely a Christmas movie, but whether it can be considered a prestigious one is unlikely. Having said that, that doesn’t mean you should avoid Christmas movies altogether, especially if you like comedy. Christmas Vacation, Elf, A Christmas Story, Scrooged and Home Alone are all excellent choices to consider.

Anyways, I’m all out of theories for today folks. I’ll see you tomorrow with some wisdom. Comment! Subscribe! Email!