The visual arts are probably the most complicated of the creative fields to pin down. I mention this because it can take many forms from two-dimensional examples of drawing, painting, printmaking, and photography, to three-dimensional with ceramics, sculpture, video, and filmmaking, with fashion, crafts, design, and architecture existing in both realms.

Then you have your visual arts which also exist as theatre – performing arts and conceptual art.

You see dear readers, there was a time when the term artist represented fine art only (painting, sculpture, and printmaking) and anyone interested in handicraft or applied art was considered a craftsperson but not an artist.

This distinction existed until the 20th century, and it has taken over a century for it shift so that artist and art applies to multiple disciplines. Which can lead to some strange conversations among artists, with elitism still on the minds of fine artists and prejudice existing in all camps. 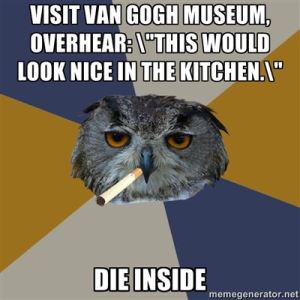 As a graduate of a fine arts program myself, I’ve witnessed the distinction that professors, graduate students, and art historians make between fine art and other arts. What is even more difficult to swallow is that all the while that the older forms have a history and perception of “artist as genius” to them, the modern world laughs at the usefulness of such a profession.

There is a social stigma that if you are an artist you are naive, irresponsible and very likely financially poor. Morally too in some cases.

This conveniently happened around the same time that the “artist as genius” phase fizzled out, and the definition of artist began to broaden. As fine art became a commodity which had to be traded and in demand to gain recognition, it fit in very nicely with the already established forms of craft and applied arts (design, fashion, architecture) which business owners would pay for and have direct input in the results.

So where does timotheories fit into this landscape you may ask? I say why not both? Why can’t we elevate all art into a realm of marketable worth as well as recognizing the unique qualities required to create any sort of work, whether it be fine art, craft, theatre, or applied art.

I have this theory you see, that we’ve moved out of a post-modern mindset (one of deconstructing everything around us to see how it works and showcase intellectual superiority) to an age of modern craft. All artists need to become experts in their chosen form(s), and learn the proper marketing skills, finance skills, and communication skils in order to share their work with the world around them.

timotheories supports the rights of artists to be successful at the profession of creating social value and entertainment for all people, and getting paid to do it.

I personally have always been driven by a myriad of artistic vehicles, so I can’t even favour one over the other because I don’t want to. I love drawing, painting, sculpture, filmmaking, writing, and performance art all the same. And I know that dabbling in photography, printmaking, design, and craft are ways that I express my ideas and creative ability just as well.

So for the sake of furthering the ambitious nature of this blog, I’m going to start sharing my own artwork with you, my friends, so showcase what I’m creating, receive critique, sell my work, and especially provide some insight into the entire art-making process.

Expect some cool collages in the coming weeks and if you’re lucky a powerful painting or two!

And in case you’ve been following the March schedule and noticed a couple of things out of order, I haven’t released the Paige Knickle interview yet, and that’s my bad. Due to some communication issues, the interview isn’t quite ready yet, so I’m going to publish Cross Talk Ep.3 next Sunday as planned, and then the interview will be ready for the 27th. We’ll have to bump the routines of famous creatives to April.

But I bet the wait’ll be worth it.

And that’s all he wrote. Please leave comments, follow/subscribe, and check in tomorrow evening for a Melodic Monday post.