Ah anarchist symbolism, you just get me don’t you? It’s funny that a movement so strongly associated with breaking down institutions and challenging globalization can be identified by large “A” and black flag symbols, as well as the raised fist.

By having these symbols, the movement struggles with the mire of misrepresentation and stereotyping.

Opposing the idea that any one person or thing can represent us all is not a new one, for sure, but punk rock still feels like the music which most strongly associated with the importance of questioning ideals and self-governing societies.

But what does love got to do with it? 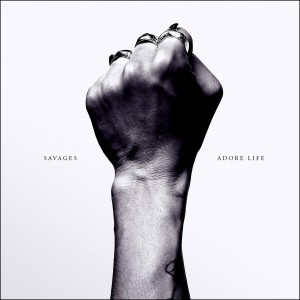 Do you folks ever buy an album solely based off of a single review you read, without doing any other research and trusting entirely in the efforts of that professional critic?

Well I can admit that I sometimes fall into that routine when I get super comfortable with someone. But these days I’m not sure if you can simply trust the opinion of one person to make all of your media consuming decisions.

And that’s what led me to do a review on Savages.

You see, Savages are an English post-punk band with roots in noise rock, and they’ve been around for about 4 years, with their 2013 debut album Silence Yourself boosting their attention into the UK charts and beyond.

As someone with heavy roots in the punk movement myself, listening to this album often feels like coming home and rightly so. With influences like Joy Division, Siouxsie Sioux, PiL, and Bauhaus, its hard not to see the dark and gloomy in Savages sophmore album. But that doesn’t mean it’s garbage and should be discarded like so much trash.

This is art rock with a heavy heart. Somewhere in between the post-modern notes and the torch songs, we find a band that is stirred by the mere notion of life.

“Is it human to adore life?” is repeated over and over in the eponymous album track. How can something so humble turn into an act of rebellion and affirmation? Drenched in confidence and love all at the same time? That’s the power of punk rock.

Manifestos and uniforms aren’t new to the genre, and political leanings often get rocked (pun intended) with every song, but Savages aren’t doing anything new here.

What makes Savages interesting is that this is human life in all of it’s complexity. What so many genres forget to do in their music is explore and be unpolished. Hell, none of us are. Sure we can get dressed up and go dancing, but we still like to wear sweatpants and dig into terrible microwaveable cuisine too.

When you listen to bands like the Yeah Yeah Yeahs, My Chemical Romance, and Death From Above 1979, you’re not doing it to numb the pain, no you want to embrace it and say to the world, fuck you, I’m still here and you can’t get rid of me that easily.

Tracks you will want to watch out for are definitely Adore and The Answer, not because these are the best songs on the record, but because it gives you a better taste for the intensity of the foursome.

The songs are overall an elemental and unquestioning force for love, but I think Sad Person, The Answer, and T.I.W.Y.G. are the ones to pay attention to.

That there is the rub – love doesn’t need to be left out of punk rock considerations, but because love is just as complex as freedom, punk rockers don’t often touch the subject with much emotional vulnerability.

Well Savages are not afraid to jump directly into the water and challenge these issues either. And for that reason alone, you should give this record a listen.

That’s all I have to say about this foursome, but I hope you have a marvellous Monday my friends, and I’ll see you tomorrow with another movie that features an “M” word.