On the more morbid side of things, I’ve been thinking about mortality quite a bit this past week. But with good reason my friends. It just seems like the music industry has been taking hit after hit over 2015. We saw the passing of Scott Weiland, Ian Fraser “Lemmy” Kilmister, B.B. King, and not even a month in 2016, and David Bowie leaves us too.

It’s hard not to ponder life, death, and what comes after, especially after a major player in the music scene lost his battle with cancer on Sunday. Someone who represented the arts and anachronisms of today well before we smartened up, rather well.

I was fortunate enough to find a copy of his 25th and last album, Blackstar, when I heard the news on Monday. And so I’ve decided to review David Bowie’s last gift to the world all throughout this week, in anticipation of my Melodic Monday post about it next week.

The only way to properly send off a music legend, and someone who I always associate with the positive side of 1980s pop culture. The movie Labyrinth.

He was a shining star in that movie.

It’s moments like these, that my mind starts to race. As it should. Because I wonder if I’m living my life to the best of my ability. There is a reason there are so many quotes and memes about the importance of following your dreams and a life half lived.

Because mortality is a real concern for everyone. No matter who you are, you will one day die. We all have that in common. Rockstars and actors are no different, their deaths are just more exposed and common knowledge.

So not to hammer the point to much, but I’ve been thinking about mortality, and my life, what to do with it. Ways I want to better myself, increase my knowledge, life experiences I need to have before I leave the mortal coil, etc.

*Which is kind of a hint for what I will be writing about in tomorrow’s Timely Thursday post, dear readers.*

What does this have to do with Wisdom Wednesday though, Tim, you ask? Well I had to decide what kind of wisdom to impart on you art makers, art shakers, and art takers without giving you something contrived. But it hit me pretty hard once I did a little digging.

Life is tough, but people love their numerically themed instructional blog posts, and I know of a place on the internet that gives wisdom, is a hell of a lot of fun, and can be incredibly inspiring, not unlike the musical heroes we lost this year.

Well have any of you ever heard of Cracked magazine? It was this kind of awesome satirical humor magazine that came about in the late 50’s and lasted until the mid 2000’s before it finally transitioned to an exclusively online brand. 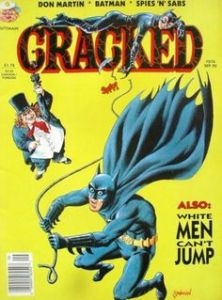 I received my first copy on a camping trip with my grandparents in 1992, the year Batman Returns came out, and just before I had to got back to school after summer.

This was the issue I read cover to cover, over and over. I suspect it had a lot to do with developing my tastes in satire, comic books, pop culture, and human behaviour. You see, this was also around the time (within a year) that my grandpa had his stroke, almost died, and lost his ability to walk, speak, and use his right arm. He eventually gained most of his walking mobility back, but his speech has been limited for over 20 years, and he still can’t use his right arm.

Anyway, I’m getting sidetracked. My point is it had an effect on me.

Cracked now regularly churns out blogs and vlogs – poking fun at and simultaneously addressing the hard issues of life. I’ve linked to some of my favourite numerically themed instructional blog posts.

Because comics, literature, and pop culture are all interesting forms of art, Cracked should feel right at home to most, if not all of you. And believe me when I tell you, I haven’t even shared the best stuff they churn out.

If you’re really itching for more theories, you should watch a few episodes of their YouTube channel. Start with this episode from the After Hours series.

Until tomorrow my friends, I hope your evening is grand and I’ll see you tomorrow with something timely.