The one thing in common with most of these shows though, is that they didn’t really have an audience over here until the early 90’s, when I was a kid, because we just didn’t know the art existed. Thankfully we have a particular movie to thank for ushering in this culture before globalization was a thing. 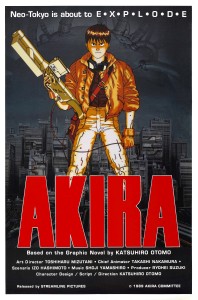 Akira was a groundbreaking animated film (or anime) which was directedby Katsuhiro Otomo. Akira the movie is a variation on it’s manga namesake which was also written by Otomo.

The movie focuses heavily on the first half of the book, and takes key elements from the second half in order to tighten the story up and fit it in a two hour window.

But is it any good?

On July 16, 1988 we see an atom bomb destroy Tokyo.  Roughly 30 years the resulting WWIII, a Neo-Tokyo has been built and is both beautiful and desolate. The Capsules gang is hanging out at a bar and getting ready to take on the Clowns. Kaneda (Cam Clarke), is the leader of the group and heads outside where Tetsuo (Jan Rabson) is admiring his red bike.

After meeting, they chase the Clowns through the city, eventually knocking most of them out. Tetsuo loses control of his bike during this fight and is abandoned when the police show up.

Elsewhere a man is wounded and leading a small green skinned child through the streets. He shoots a dog during this run and is gunned down by the police. A building collapses and the crowd disperses, revealing a mustached man and a young lady named Kei (Lara Cody), who are are split up.

Meanwhile, the Capsules continue to fight the Clowns. During this Tetsuo gets into it with one Clown in particular and beats on him. When Tetsuo looks up, he sees the green person standing in his path and narrowly misses him, causing a crash and explosion. Tetsuo is unconscious and Kaneda and friends arrive to see the green person leave. Another green person in a hoverchair tells the fleeing person there is no escape and a tall military man, Colonel Shikishima (Tony Pope), emerges from a helicopter, picks up Tetsuo, while the Capsules are taken into custody. The Colonel then leaves with the two green children.

At the police station, Kaneda and his gang are interrogated, but eventually released. Kaneda notices Kei and arranges to have her released as well. It turns out she is part of a terrorist group, but teases him for flirting with her.

At the hospital Tetsuo is examined by  Doctor Onishi (Lewis Arquette), who realizes that Tetsuo has similar psychic potential to Akira, a young esper like the green children. Akira caused the explosion 30 years prior. Shikishima is informed by Onishi that Tetsuo is the key to solving the problem of Project Akira, a secret mission that was organized by an underground terrorist group. However, Shikishima is not convinced and will kill Tetsuo if he gets out of control.

Tetsuo wakes up and heads back to school. The rest of the Capsules are chatting with their girlfriends about the fight, the arrest and their messed up hideout. Kaori (Michelle Ruff), is concerned about her boyfriend, Tetsuo. He decides that they should run away and they steal Kaneda’s bike. But Kaneda and the others see this.

The bike eventually stalls. Then Clowns appear and assault Kaori. Luckily Kaneda and the others show up just in time. Tetsuo, is upset about being rescued yet again. And decides to beat on a Clown who is on the ground already. Tetsuo then gets an intense migraine and hears the word “Akira.” Military people suddenly appear and Doctor Onishi has Tetsuo taken back to the hospital. The gang is visibly confused.

Almost simultaneously we see another building explode and a group of men flee the scene. Kaneda then sees the mustached man and Kei fleeing. He follows her as the police close in. Kaneda then aids Kei in her escape and is taken to the terrorist headquarters where the leader, the mustached man named Ryu (Bob Buchholz), reveals the plan to capture the first green esper child has failed. He wants to capture the newest government subject, Tetsuo. Kaneda has been listening in and explains that he and Tetsuo are friends, he can help them out.

There is a lot more to it, and I’m not stopping to avoid spoilers – the statute of limitations on spoilers is a year or two tops, and this movie is over 25 years old. I’m stopping because there is a lot of plot left and your appetite should be whet by now.

Pros: It is so tightly packed with plot, action, and interesting ideas, it was incredibly ambitious for it’s time. And it still holds up today. You’ve got cyberpunk visuals aplenty too.

Cons: Because it moves at such a quick pace, is content heavy, and visually dense. If you don’t pay close attention it can feel rushed and you’ll lose interest.

Points of Interest: It cost over a million dollars to re-dub and layer in a new soundtrack when the film was rereleased in 2001. There have been talks of putting together a live-action version of the film, but it’s been difficult to get it off the ground.

If you enjoy The Matrix series, Kill Bill and many other sci-fi action films, this is the anime that brought these ideas to western culture and influenced the makers of those movies. The plot is great, the visuals are stunning, and it is just as interesting today.

Sure there have been other brands like Studio Ghibli that offer anime in a digestible format, but if it had not been for Akira, we wouldn’t have seen the darker and more mature side of animated film. When CGI is the hot topic of the day, anime continues to let us see hand drawn art come to life.

My hope is that we learn from the eastern culture and begin to marry the 3D content with the traditional 2D artwork and move forward with awesome stories.

Similar to what the big studios are doing by reintroducing practical effects into film and combining it nicely with computer effects. *Cough* Star Wars The Force Awakens *Cough*. Our eyes enjoy it better.

And that’s all I’ve got to say about that folks. I hope you take some time to check this classic out.

Have a good night, and I’ll see you tomorrow for some wisdom.