I often wonder how the writer(s) arrive at a title for the movie they are making, and at what point the production executive(s) step in and make alterations, suggest new titles, or farm it out somewhere else.

Anyway, this week’s movie review had me thinking about movie titles again and wondering if this was the working title or the final product of several alterations.

But you’ll see what I mean in a minute. 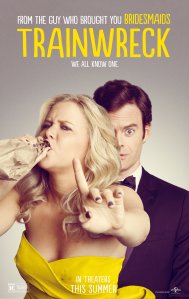 From the guy that brought you The 40-Year Old Virgin, Knocked Up, Funny People, and This Is 40 comes resident funny director Judd Apatow’s 5th outing. People usually go to watch his films because they blend just the right amount of real life humour with clever humour and clever storytelling to be perceptive, but does this one work well or is it self-indulgent?

The film is mixed bag the more and more I think about it, the concept is interesting, and a lot of the jokes are clever, but let’s go over the story first and I’ll expand further down the line.

The opening scene shows, Gordon (Colin Quinn) having a chat with his two daughters Amy (Amy Schumer) and Kim (Brie Larson), about relationships and to explain that their mother and he are divorcing because “monogamy isn’t realistic.”

Fast forward to the present, we see Amy has taken that message to heart via a montage of her current life –  partying, sleeping with lots of guys, and in a gender reversal, booting them out every night. But she is also casually dating Steven (John Cena).

Amy works at a men’s magazine and after telling her co-worker Nikki (Vanessa Bayer) her most recent conquest, we see her boss Dianna (Tilda Swinton) ask the team for article pitches. When one of her co-workers is pitching an article about a sports doctor, Aaron Conners (Bill Hader), Amy loudly expresses her opinion against sports, and Diana surprises everyone by assigning Amy the article, even though she doesn’t want it.

We see Amy and Kim packing up their fathers house. He has been diagnosed with MS and moved to assisted living. Kim has a husband now and a stepson, who Amy teases. Kim resents their dad because of his lifestyle choices and thinks he is a bad father. Amy wants to make it work and tries to salvage his belongings. Amy later visits Gordon and shares with him that most of his stuff has been thrown away.

Amy then meets Aaron to align schedules and also meets his best friend, Lebron James. Aaron quickly learns that Amy hates sports. Later that night, Amy and Steven are out at a movie. He doesn’t like her drinking, and their fight gets him into a movie theatre fight. While Amy is outside smoking a joint, Steven confronts her about the numbers in her phone.  She admits they aren’t exclusive and Steven leaves, feeling betrayed. At brunch the next morning, Amy finds out that Kim is pregnant. They visit Gordon to tell him, and he’s thrilled to “finally have a grandchild.” This upsets Kim, but Gordon doesn’t believe Allister is really his, so after Amy teases the boy, Kim leaves, noticeably upset.

Next, Aaron is being interviewed by Amy, where she gets a text from her sister stating they should move Gordon to a cheaper home. She has a panic attack, Aaron calms her down, and suggests food. They hit it off. After drinks they get a cab, but Amy corrects the driver, that they only need one stop. And Amy breaks her rule of not staying the night.

….And I’m gonna stop you right there, don’t want to give the whole plot away!

I have to admit, while I did enjoy watching it, it’s hard to tell if this is an Amy Schumer movie directed by Apatow, or an Apatow movie that starts Shumer. It feels very disjointed, and kind of aimless, which is typically his style, but it doesn’t really make a solid point which seems to be Shumer’s trademark. Having mentioned that, the themes start off interesting by dealing with modern relationship challenges, but it doesn’t pack the raunchy punch that I was expecting, almost like the jokes were there just for shock.

It’s interesting enough to warrant a watch, and people who are fans of Apatow and/or Shumer will enjoy it, but I don’t expect it be kept in any “best of” lists.

Pros: Bill Hader is definitely likeable as Aaron and Tilda Swinton is hilariously awful as Dianna. It is quite funny, and the jokes about interns, The Usual Suspects, and sports are all on point, among other pop culture nuggets.

Cons: The scenes seem to run on a bit longer than they need to and the drama often feels forced. Also the film as a whole is a little long for what it is.

Points of Interest: Chris Rock came up with several of LeBron James’ lines. Bill Hader lost 20 pounds for this role. Judd Apatow contacted Amy Schumer to make this movie after hearing her interview on the Howard Stern show. Judd was blown away by how funny and intimate she was while discussing the troublings of her father’s illness.

Overall, this is a good comedy, but not one of my favourites.

Having said that, I still think that the final name of the movie makes sense. We are looking at the redemption song of a person who at the start of the movie is a “trainwreck” and the movie functions that way too. But what do you think dear readers?