The third week of album reviews in a row? Cool right?

And I have a category for this type of blog instalment now! I think you’ll agree that it suits these posts. MELODIC MONDAYS.

In what seems like a cleverly calculated month of reviewing vocal duos (EODM) (July Talk), I seem to have gone straight into my next one. When is the combo-breaker coming? Even I don’t know… But let’s instead focus on the dual voices of two very talented brothers. – What they’ve produced is a pretty good mix of beats, heart, and lyrical feats. 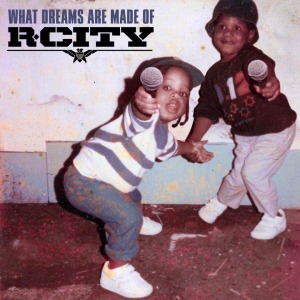 I love a good debut album, don’t you? It really helps you feel like you are directly supporting the act’s career and it makes the bond you have with their music just a little bit stronger. Also, you can totally tell people off when they finally get into your favourite musical entertainer(s) years down the road. Okay lets be real, its more like months.

*Spoiler alert* While it is a debut album, this should be considered a sophomore album in a lot of ways. Read this article to see what I mean.

That’s right R.City is made up of brothers Theron and Timothy Thomas, who incidentally, are from St. Thomas in the Virgin Islands. Try saying that a bunch of times really fast, its almost as fun as listening to their music!

R. City’s (also called Rock City and Planet VI) formation story is a pretty cool one, and they spend a decent amount of time outlining it for us in their emotional and somewhat unconventional outro track, Our Story. But before you start listening sporadically, I do think you should listen to the whole record and finish it off with that track as intended. The impact will be stronger, trust me.

On that note, some may be surprised to learn that they have been hit-makers for a number of will known acts, including Sean Kingston, Akon, Miley Cyrus, and others before they finally found a platform to release their own album.

The list of songs they’ve written is seriously super long though.

Combining their efforts and sampling from styles of calypso, hip hop, pop, r&b, reggae and rock, it’s pretty hard not to enjoy most of the tracks on this record. There are emotional songs that deal with their “hustle and grind” like Over and Our Story, then the slow jams Take You Down and Make Up (read: babymaking music as Ron Burgundy would call it) , feel good songs Crazy Love and Don’t You Worry, and some more politically charged music that deals with the environment they grew up in showcased in Live by the Gun and Slave to the Dollar.

When it comes right down to it, Again is probably my favourite song on the entire album – it fuses elements of those slower tracks with the real struggle the brothers Thomas have gone through which has directly affected their relationships with their loved ones, just so they could get to this career point.

Lastly, I’m sure you’ve heard Locked Away at this stage in the game. Adam Levine of Maroon 5 fame is featured on the track, and the music video is pretty damn good too. Or maybe you’ve watched I’m That … with 2 Chainz? It’s an interesting one to view just to see how they deal with people who assume they are Jamaican simply because they are Caribbean.

R.City asks us What Dreams Are Made Of in their album name, but I think they answer it too.

Enjoy your Monday dear readers; it’s gonna be over soon. But lucky for you, Tuesday is right around the corner and I’ve got another review to share with you and maybe some theories too.