Okay readers, I have a confession to make. I don’t want to like The Beatles.

“The Beatles? How can you not like The Beatles?!?!” That’s probably what you’re thinking.

I don’t know, I generally just do not care for their music. It probably stems from some traumatic experience I had as a child with a beetle. Yes, there a lot of fans out there which kind of weigh heavily against my one little opinion, and their lyrics are pertinent in so many instances, almost perfectly pairing with topics and it seems like everything else and everyone else is constantly referencing them too.

But we can theorize about The Beatles cultural significance some other time.

So I guess timotheories has to find a way to like this band, or at the very least, be inclusive of them. So I can make a point.  Not unlike some certain imaginary characters that I just met for the first time recently.

Come on Tim, what are you getting at now?

Well folks, I’m going to take it to the next level, yet again. Yesterday I talked about introducing reviews into my regimen, and this is another piece of the puzzle. That’s right, timotheories is going to begin its regular review of movies that I am watching as they are released – whether its in the cinema or for the home, and fingers crossed, on a weekly basis.

Conveniently for you, that Beatles reference and the blog post name will now make sense – I’m going to start with the movie Aloha.

I’m still playing around with how to format these reviews but it goes a little something like this. 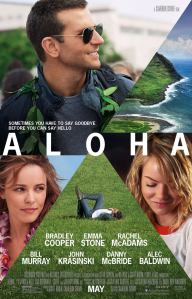 Synopsis: A celebrated military contractor returns to the site of his greatest career triumphs and reconnects with a long-ago love while unexpectedly falling for the hard-charging Air Force watch-dog assigned to him.

Cameron Crowe is known for a few really solid movies over the period of a decade. Unfortunately that decade has come and gone – it was between 1989-2000. T

hat doesn’t mean his pass at Hawaii is irrelevant.

With a star filled cast, its hard not to at least enjoy the characters in Aloha. But my biggest challenges with the movie were the connections that were never properly made between characters. It’s equivalent to that old adage of ships passing in the night. Every character has the potential to pull us in, but the interactions are sterile.

The move takes place in Hawaii. After a bit of backstory is built for Brian Gilcrest (Bradley Cooper), in which he describes how he underwent some work challenges after the recession of 2008 and moved from the military into contract work, we are immediately introduced to John ‘Woody’ Woodside (John Krasinski), who is flying Brian in for a gate ceremony on the island of Hawaii. When the plane lands, we learn that Brian’s ex-girlfriend Tracy (Rachel McAdams) is there and central to island funerals. It also turns out that she is Woody’s wife.

Great, the stage seems to be set for a love triangle and some heated words between Brian and Woody!

Then we are introduced to Allison Ng (Emma Stone), a resident of the island who happens to work for the Air Force, is subordinate to Colonel ‘Fingers’ Lacy (Danny McBride) and General Dixon (Alec Baldwin), and tasked with watching Brian.

Even better – conflict from his old job, with hilarious authority figures, and an opposites attract scenario.

Lastly, we learn that the man whom Brian works for is Carson Welch (Bill Murray) and he is giving Brian this opportunity to save himself from previous disaster.

Bill Murray, people. How can you not be excited for this?

Sadly, as I mentioned, none of these relationships really stretch and grow in the ways that I was hoping they would. Granted, there are some funny jokes here and there, but nothing especially lasting or quotable.

My favourite parts are probably the interactions between Cooper and Krasinski. Without giving too much away, I will tell you that Krasinski’s character doesn’t speak much, and with some clever use of subtitles, we get a laugh out of it.

And there are a couple of other great details that shouldn’t be ignored either. For instance, we don’t see a dissolve of the established marriage in the film, as per typical Hollywood demands, which is a very nice change of pace, and a bit of a spoiler (my apologies). Also the reason why Brian has been contracted by Carson Welch isn’t very clear up until the end of the movie, but it raises an interesting point about the future of warfare, sadly without ever REALLY saying anything about it.

I really didn’t care for the lack of direction regarding the Hawaiian lore elements either. It just seemed thrown in there, and it would have been nice had the lore been made more mystical and relevant from the get go. Instead we are treated to factoids and opinion instead of something “happening” to convince us of the supernatural. Also, the Hawaiian indigenous people are a nice touch, but why don’t they play a more prominent role?

Running at 105 minutes, the movie feels too long for what we get, but if it were even 15 minutes longer, with more story, it might be a significantly better experience. I won’t recommend this for the average movie goer, but if you are a cine-file, you might benefit from some of the concepts and themes the film explores, knowing that it will come up short.

And there you have it! My first movie review. I hope you enjoyed my post. I look forward to hearing your feedback. Leave some comments and questions. Next week should be an age old tale… Curious?

Out of theories for now, check back soon!